‘The Science Behind the Sniff’

NC State professor transforms her bestselling book to bring the science and wonder of working dogs to a younger audience.

Cat Warren (yes, a person named Cat writes books about dogs) says she was overwhelmed by the positive response to her 2013 New York Times bestseller, What the Dog Knows: Scent, Science, and the Amazing Ways Dogs Perceive the World.

In it, she details how her unruly German shepherd Solo became proficient in helping law enforcement officials search for the missing and presumed dead. The pair trained with police and sheriff’s K-9 units and answered more than three dozen calls from all over the state for eight years.

While the book has its touching scenes, it’s also a frank discussion of the science behind the training, written by a former journalist and science writer who is a professor of English at NC State.

After discovering that her book appealed to children — and with a nudge from her agent — Warren decided to write a version for young readers.

What the Dog Knows, Young Readers Edition was published Oct. 8 by Simon & Schuster Books for Young Readers. In the coming weeks, Warren will give readings at bookshops throughout North Carolina.

Before she hit the road, Warren sat down with us to answer a few questions about the reimagined version of her original labor of love.

How did it feel to get such a great response to What the Dog Knows?

I was overwhelmed and truly moved. The feedback that I loved and still love beyond measure is when people email to tell me about the dogs in their lives who have changed them. In some cases, I’ve heard from people who are now part of a search and rescue team and credit the book with sparking their interest in the work.

And occasionally, I got the very sad message from someone whose loved one was still missing. But those personal responses, whether from someone in law enforcement telling me the book taught them a lot, or someone who now understands their impossible dog better because of the book, make me feel wonderful about having written it.

What made you decide to publish a version for young readers?

One day, the young son of a homicide detective told me he wanted to grow up to be just like the 11-year-old girl cadaver dog handler he’d read about in the adult book. I started to realize that most children were fascinated, not frightened or disgusted, by the subject. I gave talks and demonstrations at K-12 schools, museums, science fairs — and to scout troops. So when my agent suggested an adaptation of the original book for young readers, I was immediately intrigued.

It wasn’t easy! But I kept a couple of things at the front of my mind. I didn’t want to condescend to young readers. And I wanted them to embrace the science. So for this version of What the Dog Knows, I removed entire chapters and storylines that deviated from the central story of training a rebellious German shepherd as a scent-detection dog. I rewrote most of the book, moved material around and added new material to make the timeline straightforward.

I had invaluable help from several young readers who took highlighter pens to the adult book. They marked what they liked, where they were scared and when they were bored. But I didn’t stint on emotionally difficult material or the complex science behind the sniff.

Patricia J. Wynne, a scientific illustrator and artist who is on the staff of the American Museum of Natural History, provided more than two dozen beautiful illustrations to highlight and clarify crucial scientific concepts. I used more than 100 photos to make the book more appealing to a young audience. But slavery, war, homicide and accidental death, drug addiction — even the ethical questions of using and misusing dogs who want to please us — remain central to the new book. 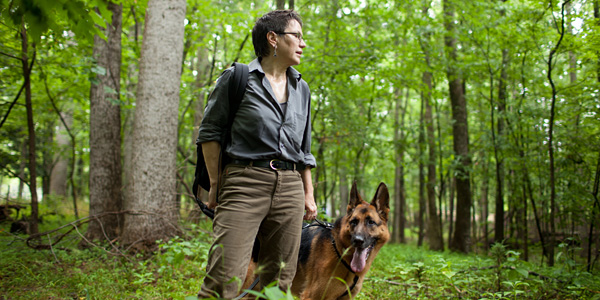 In Praise of Working Dogs

Cat Warren’s new book explores the science and wonder of working dogs. Find out “What the Dog Knows” in this touching, engaging and informative tale of canine can-do.

What do you hope children will take away from reading the book?

I hope they come away with the realization that living and working and understanding animals is both hard and one of the most satisfying things you can do, whether you do it after school or ultimately for a living. The animals who live with us need us to understand them and try to make their lives good, just as much as we depend on them to make us feel happier and get us out of the house and into the world.

Is Solo still with you?

Solo lived a good long life for a German shepherd, but he’s gone now. We still miss him. We have Jaco, a German shepherd from the Czech Republic, and Rev, an adolescent German shepherd from upstate New York. Jaco has epilepsy, which prevents him from doing cadaver work. But Rev, I expect, will love doing some kind of nose work when he’s a little older. He’s eager and thoughtful. And my husband and I are completely in love with him.

Talking Turkey: How the Bird Made a Comeback in North Carolina