Why is NC State called the Wolfpack? Learn how we adopted our name — and how our identity has evolved over a century.

Just after World War I, the North Carolina State College of Agriculture and Engineering was establishing a new identity.

As the entire student body decommissioned from the Student Army Training Corps and the school broke in its new official name, a new means of campus communication, a new form of self-governance and new athletics leadership, what is now known as branding was a big part of building a better postwar version of the 32-year-old land grant institution that had adopted red and white for its colors in late 1895, but had no official mascot or nickname.

For years, the former N.C. College for Agriculture and Mechanic Arts (AMC) had been yoked with names given by outside entities. The Aggies. The Farmers. The Techs. Names that could easily be leveraged into pejoratives by classicist rivals.

What Could Have Been

Finding the right name to show pride in the people’s college.

The institution needed something better. With good timing, an anonymous “old grad” came through with a suggestion in this unsigned letter to the February 1921 NC State Alumni News that fit perfectly and uniquely for the school located on the west end of Raleigh.

“It has always appeared to me that those teams which had traditional symbols and nicknames have the greatest morale and spirit among the colleges. Take, for instance, the Yale ‘Bulldog,’ or the Princeton ‘Tiger,’ and the ‘Carolina Tarheels [sic],’ with many others. These names add a picturesque touch to those colleges which I have always thought reacted favorably on the playing of the team, not to speak of the added drawing power of something like the Gold [sic] Tornado from Georgia Tech. Pride is taken in these names and teams traditionally try to live up to them. Now, my suggestion is that State teams take up the symbol of the Wolves. Here is a snappy, aggressive name which would have a most favorable effect on the College. To have the State team known as the Wolf Pack would add tremendously in publicity.”

Here is a snappy, aggressive name which would have a most favorable effect on the College.

That’s counter to the oral tradition advanced in many places that the nickname came from a letter to a local paper that said NC State fans were as “unruly as a pack of wolves” at a football game. Supposedly, the school’s fans quickly and affectionately adopted the name for its football team.

A copy of that letter has never been unearthed, nor has any evidence that the school’s Board of Trustees or Athletics Council ever officially discussed or adopted “Wolfpack” as the football team’s official nickname.

As in nature, the Pack formed on its own.

Under the leadership of President Wallace Carl Riddick (1918-23), once a civil engineering professor and the person most responsible for the development of athletics on campus, massive changes were underway at NC State following World War I. The college divided its programs into schools for engineering, textiles, education and business, as well as a graduate school.

In athletics, new concrete grandstands replaced the wooden bleachers at the on-campus football/baseball/track stadium named in Riddick’s honor. Alum Harry Hartsell returned from his war service to resume his leadership of the athletics department and football program.

The anonymous alum’s nickname suggestion became a reality 100 years ago this week. The day before the first football game of the season, the Fayetteville Observer wrote: “Tomorrow afternoon at 3:30 p.m. Coach Hartsell will unleash the Wolfpack in the opening game of the grid season. Randolph-Macon furnishes the opposition.”

In its coverage of the Sept. 25, 1921 game, the News & Observer, one of the outlets that most often used the earlier nicknames, noted that for two quarters the “Wolfpack was lamblike,” but the paper begrudgingly accepted the new moniker.

“Living up to its newly acquired nickname in parts of only two quarters, [the] North Carolina State College ‘Wolfpack’ yesterday pried the lid off the 1921 gridiron season by handing a 21-to-0 drubbing to Randolph-Macon College of Virginia.”

Technician, the Agromeck and the NC State Alumni News all immediately began referring to the football team as the Wolfpack.

This week marks a century as the Wolfpack, a name we first adopted in 1921.

For many years, however, local papers still referred to other State College teams by the old nicknames, at least until 1925 when head football and basketball coach Gus Tebell introduced new red silk basketball uniforms for his hoops team. For that era, Tebell’s squad played fast and furious on the hardwoods and adopted “Red Terrors” as its nickname. That became common usage for all teams other than football throughout the Great Depression and World War II, when the campus again changed its emphasis from general education to military training for the war effort.

When Col. John Harrelson returned from his service in World War II, his title changed from dean of administration to chancellor, and he became the first chief executive of the college to have that title. One of his first proposals as the institution’s new leader was to rid the football team of the “Wolfpack” nickname, since he associated that name with German navy submarines.

In July 1946, less than a year after he earned his new title, he asked the student body to consider something different.

“The only thing lower than a wolf is a snake in the grass,” proclaimed the veteran commander in both world wars.

He offered a contest for students and alumni to come up with a better nickname, with first prize being six season football tickets for the 1947 season.

The nominees were less than inspiring: the North Staters, the Cardinals, the Hornets, the Cultivators, the Pine-Rooters (an eastern North Carolina name for pigs), the Auctioneers and the Calumets. The latter two suggestions were references to North Carolina’s 200-year-old tobacco heritage.

As it turned out, the overwhelming choice of the all-male student population — and most of their wives — was to keep the Wolfpack nickname. Despite his military misgivings, Harrelson relented, as long as all teams adopted the same nickname.

One Pack, One Brand

It didn’t hurt that the 1946 football team, led by newly hired and nationally renowned coach Beattie Feathers, had the most successful season on record. The Wolfpack — with a mechanical wolf in tow — was invited to play the first postseason bowl game in school history, facing Oklahoma in the Gator Bowl in Jacksonville, Florida. Hundreds of students howled from the Raleigh depot all the way to the Sunshine State on a train specially chartered for the game.

NC State has a live mascot named Tuffy. The pup is a Tamaskan, a breed chosen for its wolf-like appearance.

The success of those athletics teams garnered unprecedented national attention for the school.

For the next three decades, various unofficial versions of the Wolfpack logo became common for all teams as the athletics department continued to grow, with the famous Strutting Wolf logo representing NC State throughout the 1970s, which is generally considered the Golden Age of Wolfpack athletics.

Wolfpack in the Wild

With effective branding and distinctive logos, the Wolfpack is immediately recognizable around the world for its affiliation with NC State. These are the current logos in-market, as well as some vintage marks used through the years.

Students and alumni alike have helped enhance the nickname through the school’s spirit squads, friendly male and female student-portrayed mascots and live-animal mascots on the football sidelines.

Few people around the country have any confusion about the association between NC State and the Wolfpack.

In November 1983, a few months after head coach Jim Valvano and his men’s basketball teams captured the nation’s attention by winning the unlikeliest NCAA championship in the unlikeliest manner possible, the school joined with other schools in the ACC in protecting its nickname and logos. It registered “Wolfpack” and the Strutting Wolf and Block S logos as federally licensed trademarks with the U.S. Patent and Trademark Office — one of the first NCAA universities to do so — because of the nickname’s unique one-word construction and the preexisting awareness of NC State teams.

in trademark royalties are earned annually, going toward the university’s general scholarships fund.

NC State’s trademarks now bring in more than $1 million per year in trademark royalties to the NC State general scholarships fund, through the sale of officially licensed collegiate apparel and other branded goods. The university created a trademark office in 2019 within University Communications and Marketing, which not only has oversight of trademark licensing but also works to protect the trademarks from encroachment or unauthorized use.

In the modern era of athletics branding through international apparel companies, nicknames are more important than ever but less unique. Among the five most popular nicknames in American college and professional sports there are 1,603 “Eagles,” 1,345 “Tigers,” 1,136 “Bulldogs”, 1,124 “Panthers” and 969 “Wildcats.”

But still only one “Wolfpack.”

Generations after that first pack was first formed, the nickname remains the snappy, aggressive and, most importantly, unique and valuable brand the unknown “old grad” was looking for when he suggested it a century ago. 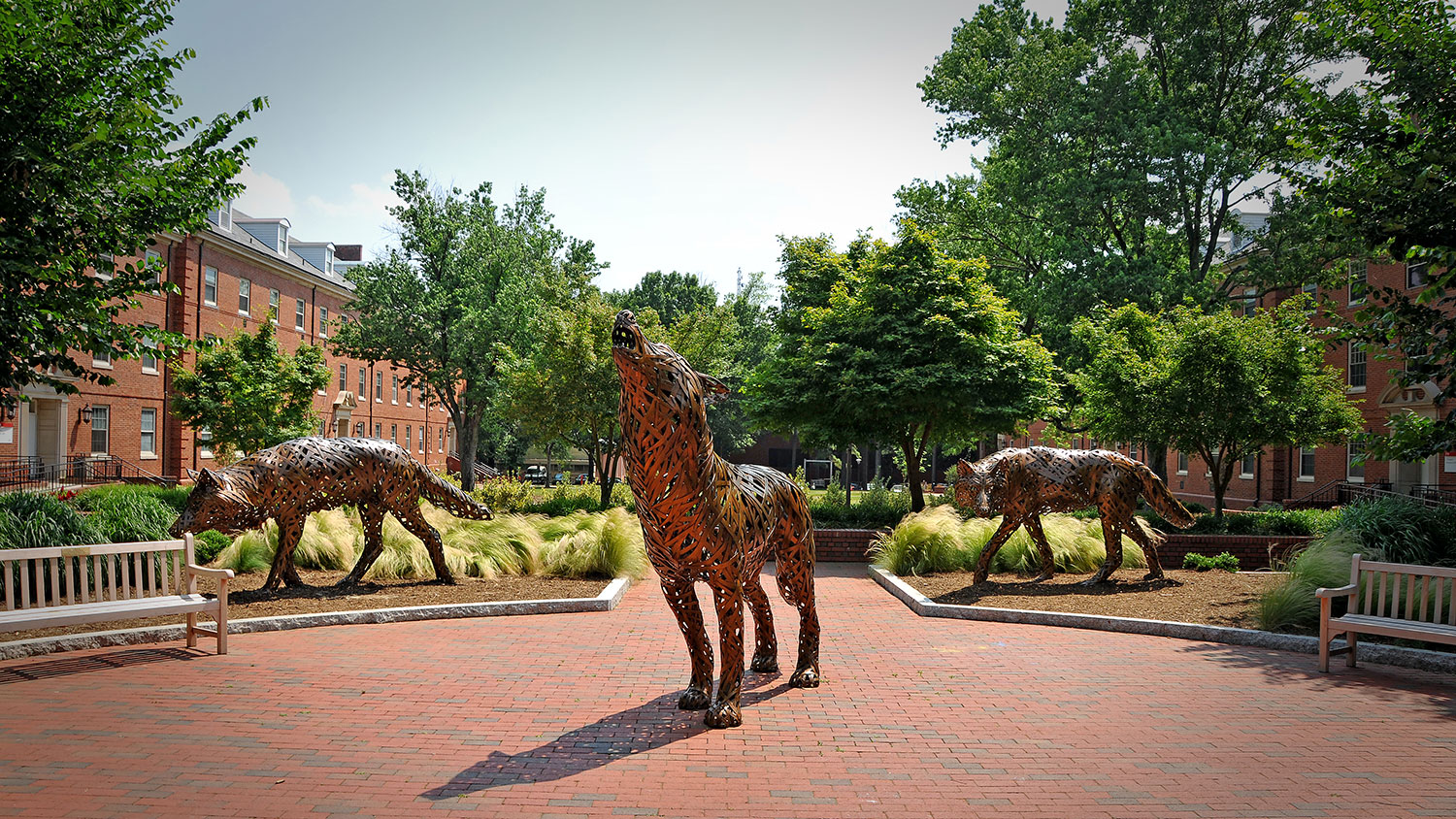 Visit our Trademark Licensing office’s website to learn about our spirit marks and how to use them.

Dig deeper into our marks 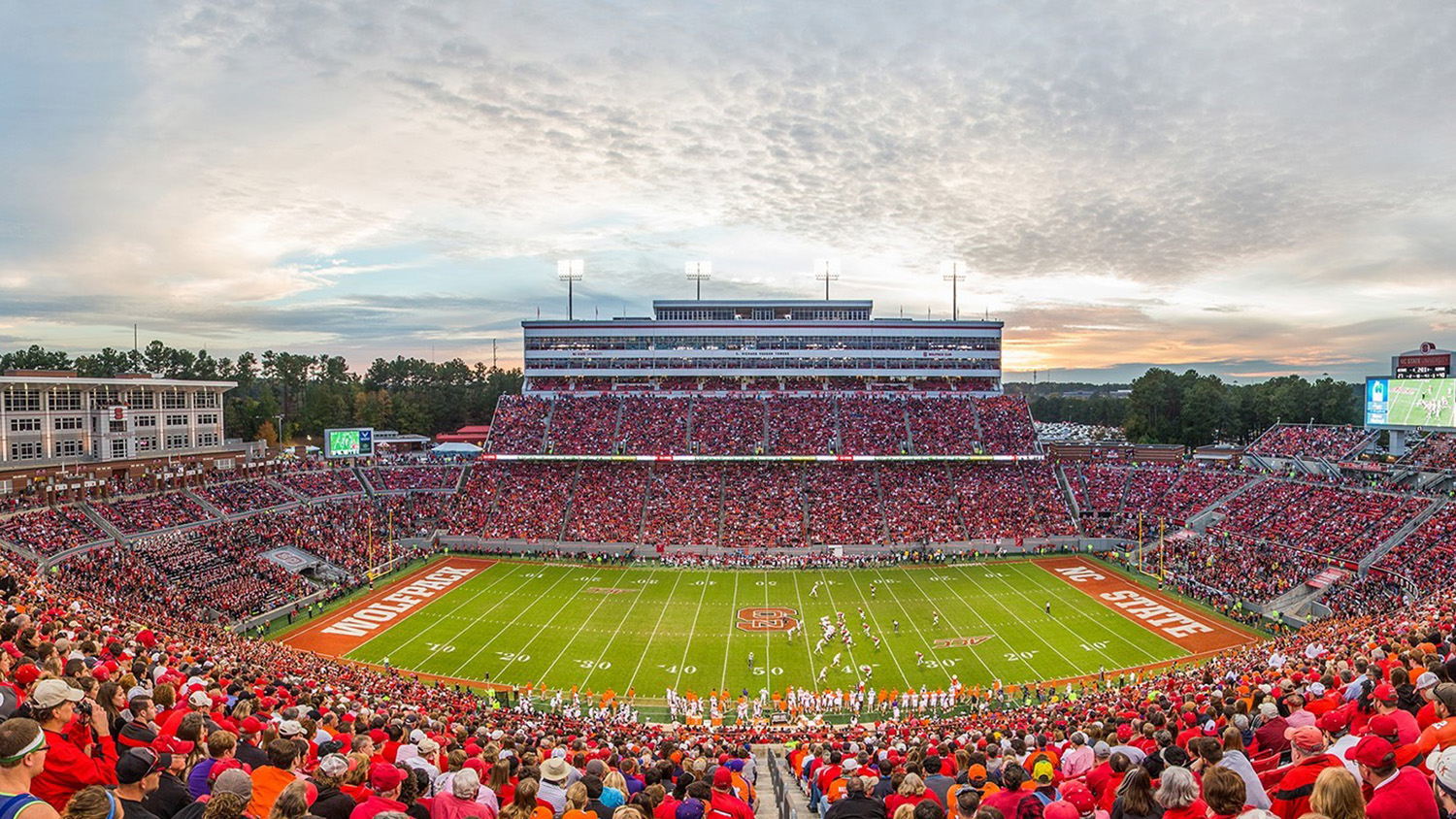 For the longest time, Carter-Finley Stadium was a dream. Now, it’s the perfect home for almost 60,000 NC State fans. 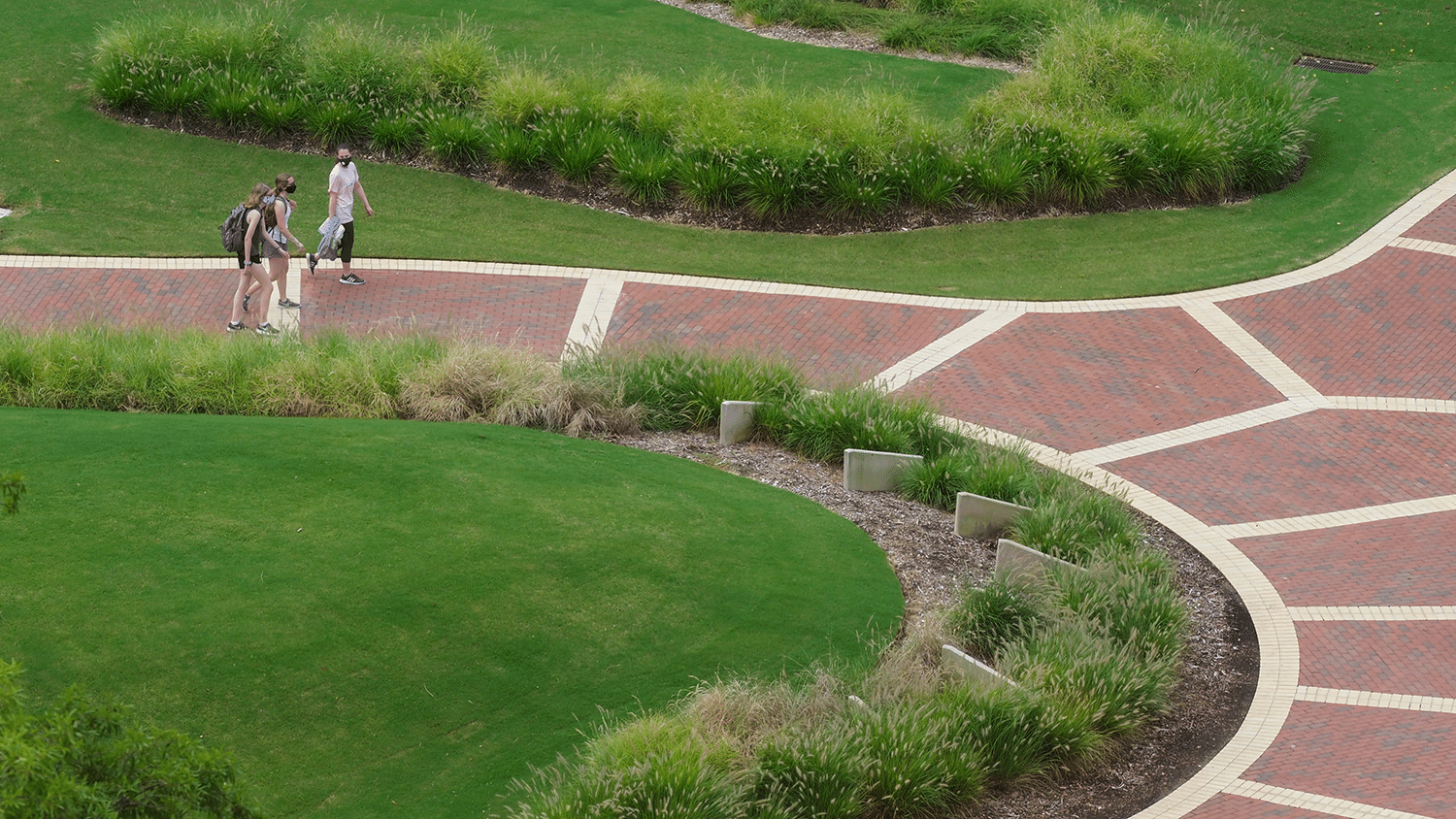 Officially named “University Plaza,” this hallowed place is where the NC State community has criss-crossed, congregated and celebrated for decades.