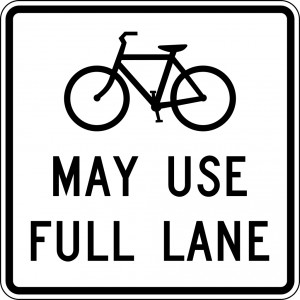 A simple change in the wording of a traffic sign – from “Share the Road” to “Bicycles May Use Full Lane” – could help clarify the rules of the road for bicyclists and motorists, according to an NC State University study.

“‘Share the Road’ signs are common but what that means in terms of how drivers and bicycle riders should interact can be ambiguous,” says George Hess, natural resources professor and co-author of the study in PLOS ONE. Some bicyclists complain that motorists consider them to be in the way, while some motorists accuse bicyclists of hogging the road.

Misunderstandings on the road can be deadly. “Personal safety probably ranks as the most important factor deterring people from commuting by bicycle, so anything we can do to improve safety, and perceptions of safety, is incredibly important,” says co-author Nils Peterson, also a natural resources faculty member.

In fact, traffic regulations in all 50 states treat bicycles as vehicles with essentially the same rights to be in the travel lane as cars, Hess says.

The researchers administered a Web-based survey, using Twitter to recruit survey takers. They compared whether three traffic control methods communicated the message that bicyclists are permitted in the center of the travel lane, without having to “get out of the way” to allow motorists to pass without changing lanes.

Hess and Peterson found that survey takers who saw a “Bicycle May Use Full Lane” sign were more likely to respond in ways that recognized bicyclists’ right to use the road than those who saw no sign. The effect was particularly strong for people who bicycled 10 or fewer miles per week or commuted primarily by car.

In contrast, those who saw a traditional “Share the Road” sign with a bicycle image showed no significant difference in response from those who saw no sign at all.

Those who saw a third option, shared lane markings of bicycle images painted on the pavement, were more likely to recognize bicyclists’ right to use the roadway, but not as consistently as those who saw “Bicycles May Use Full Lane” signs.

“‘Bicycles May Use Full Lane,’” is a pretty clear winner,” Hess says. He points out that Delaware stopped putting up “Share the Road” signs in 2013 because the language appeared to put the onus on bicyclists rather than motorists.

However, the survey showed a gap between traffic knowledge and road safety. While 92 percent of survey takers who saw the “Bicycles May Use Full Lane” sign said that it was legal for a bicyclist to use the center of the lane, only 70 percent said it was safe for them to do so.

Hess and Peterson suggest departments of transportation consider replacing “Share the Road” signage with “Bicycles May Use Full Lane” signs, possibly in combination with shared lane markings, particularly in places where lawfully passing within the same lane is not possible.

The researchers would like to do further research with simulations and on-road tests that reflect real-life scenarios.

Hess and Peterson both regularly commute to work by bicycle. Safely increasing the use of bicycles for transportation in the U.S. could bring a multitude of benefits, including greater mobility among disadvantaged groups, improved public health, lower obesity rates, less traffic congestion and reduced greenhouse gas emissions, Peterson says.

“Replacing a personal motor vehicle with a bicycle is the single most environmentally beneficial and personally profitable action most people can ever take,” Peterson adds.

Published: Online in PLOS ONE

Abstract: Many global challenges, including obesity, health care costs, and climate change, could be addressed in part by increasing the use of bicycles for transportation. Concern about the safety of bicycling on roadways is frequently cited as a deterrent to increasing bicycle use in the USA. The use of effective signage along roadways might help alleviate these concerns by increasing knowledge about the rights and duties of bicyclists and motorists, ideally reducing crashes. We administered a web-based survey, using Twitter for recruitment, to examine how comprehensibly three US traffic control devices communicated the message that bicyclists are permitted in the center of the travel lane and do not have to “get out of the way” to allow motorists to pass without changing lanes: “Bicycles May Use Full Lane” and “Share the Road” signage, and Shared Lane Markings on the pavement. Each was compared to an unsigned roadway. We also asked respondents whether it was safe for a bicyclist to occupy the center of the travel lane. “Bicycles May Use Full Lane” signage showed notable increases in comprehension among novice bicyclists and private motor vehicle commuters, critical target audiences for efforts to promote bicycling in the USA. Although limited in scope, our survey results are indicative and suggest that Departments of Transportation consider replacing “Share the Road” with “Bicycles May Use Full Lane” signage, possibly combined with Share Lane Markings, if the intent is to increase awareness of roadway rights and responsibilities. Further evaluation through virtual reality simulations and on-road experiments is merited.