Sniffing Out Cancer in Canines — And Humans, Too

College of Veterinary Medicine professor Matthew Breen developed an innovative way to detect bladder cancer in dogs. Could their owners see the health benefits as well?

Matthew Breen, a professor of genomics at NC State, says his 25-year career has roots in childhood heartbreak.

“When I was young, my family had two dogs die from cancer and there was very little we could do to help them,” says Breen. “There were great strides being made with human cancer research, so why were we unable to help our animal companions more?”

“We are committed to making that change happen at NC State,” he adds.

Today, the internationally recognized researcher specializes in molecular cytogenetics: the study of the structure and function of cells and chromosomes. His work in the College of Veterinary Medicine is helping our pets live longer, healthier lives — and unlocking new insights about human cancers along the way.

Man’s Best Friend, in Sickness and in Health

Since joining NC State’s faculty in 2002, Breen has focused on exploring the genetics and genomics of animal diseases, including how they initiate and respond to treatment.

He was a member of the team that sequenced the canine genome 14 years ago. The project sparked a new area of focus in his field: comparing the canine and human genomes to accelerate discoveries for both.

Humans and their furry friends actually share a very similar genetic makeup. And they share certain types of cancers, too. “Many cancers diagnosed in humans and dogs have a similar pathology and clinical presentation,” says Breen.

But when it comes to canines, it’s often easier to pinpoint the genetic abnormalities that lead to those cancers. This is especially the case for purebreds. Dogs of the same breed have less genetic variation among them than humans or mixed-breed dogs, making them an ideal genetic model.

Now, Breen’s lab works extensively in the area and he’s become a pioneer in comparative oncology.

“By working with human and animal cancers side by side, we are able to find shared features that may help identify the drivers of these cancers and provide opportunities to highlight targets for new therapies,” says Breen.

Take, for example, Breen’s work with the BRAF gene.

Six years ago, his team discovered that a single mutation in the gene was found in 85% of dogs with transitional cell carcinoma (TCC) — also called urothelial carcinoma (UC) — which is the most common form of bladder cancer in canines. More than 80,000 dogs in the United States will be affected this year alone.

This particular BRAF mutation was already known to exist in some human cancers, but Breen’s discovery helped unlock its significance for both species. It also revealed an opportunity to create a much-needed tool to aid diagnosis.

By working with human and animal cancers side by side, we are able to find shared features.

In most cases, canine bladder cancer isn’t diagnosed until it has reached an advanced stage. That’s because the cancer shares many clinical signs with other, more common urinary tract conditions.

Treatments for the common alternatives may alleviate symptoms temporarily, but they mask the larger problem and buy the cancer more time to progress. In fact, upon diagnosis, more than half of canine bladder cancer cases have already spread.

Identifying the BRAF mutation as a genetic signature of canine bladder cancer was a powerful insight. From there, Breen’s team began developing a molecular diagnostics test that could identify the mutation — and detect the cancer earlier than ever.

That molecular test — called CADET® BRAF — was developed in Breen’s research laboratory in 2014. Using a urine sample, the system detects cells that possess the BRAF mutation and can monitor changes in the number of mutated cells being shed during treatment of canine TCC and UC.

It offers several improvements over current alternatives. Requiring only a simple free-catch urine sample, CADET® BRAF is the only non-invasive approach. Other methods often involve costly procedures, such as sedation or anesthesia, that carry additional risks.

The test can also detect bladder cancer in the early stages of the disease, potentially leading to improved outcomes.

CADET® BRAF represents the world’s first liquid biopsy for the detection of cancer in veterinary medicine.

“We can detect the cancer in dogs that have already presented with clinical signs and avoid repeated attempts to treat solely the signs,” says Breen. “That allows more time for the veterinarian and owner to develop a plan to treat the root cause. In addition, we have been able to detect the presence of very early disease, several months before the dog has any clinical signs.”

“Now we have to determine how to manage these preclinical patients, and that is part of ongoing work by our team at NC State’s College of Veterinary Medicine,” he adds.

The test is also dependable. After rigorous validation of thousands of dogs, Breen says he’s found that the presence of the BRAF mutation in canine urine is a highly reliable indicator of the presence of TCC/UC. “We’ve shown the BRAF mutation isn’t found in the urine of healthy dogs or dogs that have other common conditions such as bladder polyps, inflammation or chronic cystitis,” he says.

In the two years following the development of CADET® BRAF, Breen focused on developing a strong proof of concept. Teaming up with the American Kennel Club, he recruited urine samples from hundreds of dogs to show that the approach could work with real patients.

His next step was commercialization. Breen’s startup, Sentinel Biomedical, was formed in 2015. Located right on NC State’s campus, the company works to develop and scale diagnostic tests for the health care industry.

Since its formation, they’ve developed another product called CADET® BRAF-PLUS. The test is designed for dogs who don’t have the BRAF mutation but do show clinical signs of TCC/UC. It can detect over two-thirds of bladder cancer cases not identified by CADET® BRAF, increasing the overall detection sensitivity of the tests to over 95%. 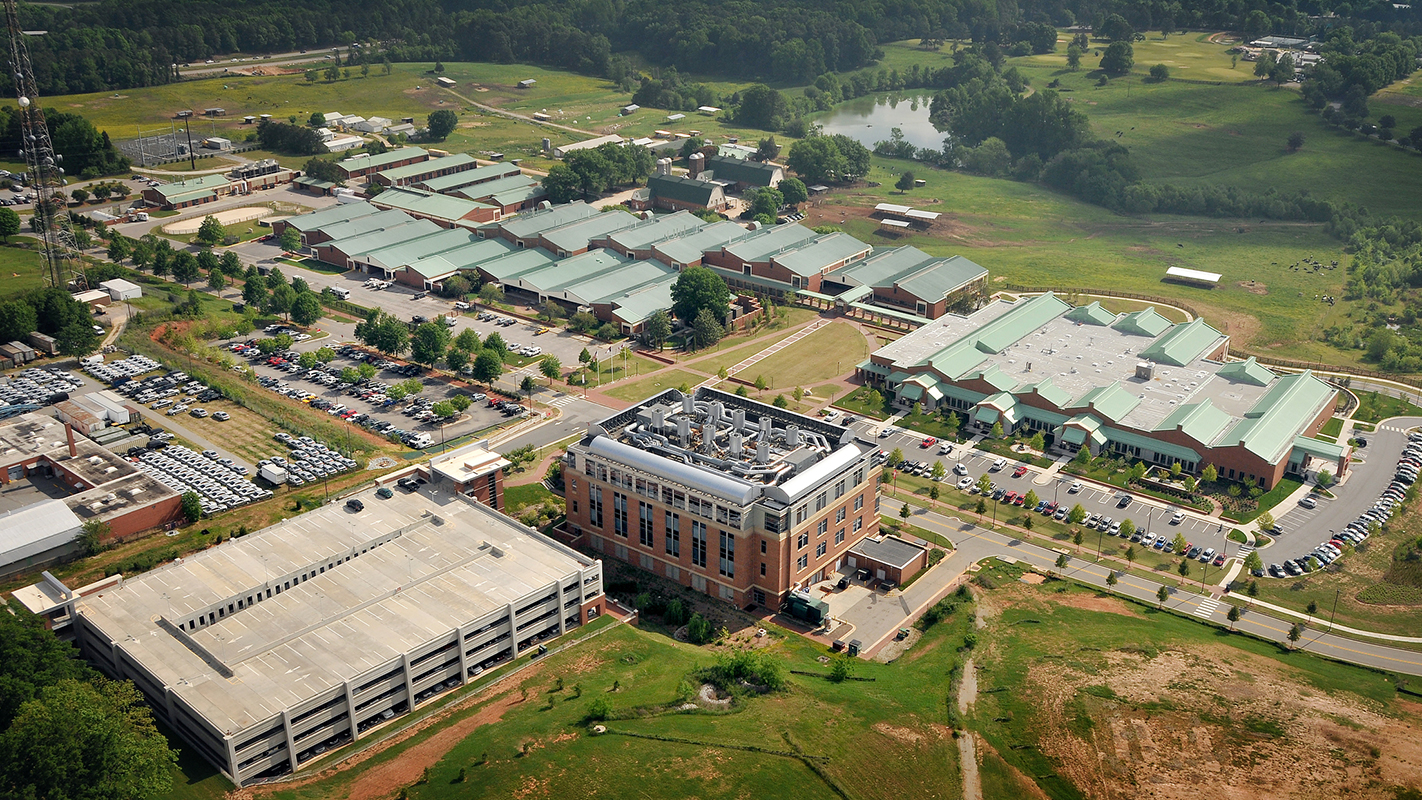 Headquartered right on NC State’s campus, Sentinel Biomedical seeks to improve diagnosis and treatment for dogs — and their owners.

What’s next for Sentinel Biomedical? It recently announced a joint venture with Antech Diagnostics, part of MARS. Together they’ve formed Antech Molecular Innovations, also based on NC State’s Centennial Campus, and work to broaden access to CADET® BRAF and CADET® BRAF-PLUS.

“With the distribution channels of one of the world’s largest animal health providers, we are providing veterinarians with easy access to the tests we develop and enhancing our ability to become a global leader in innovation for veterinary molecular diagnostics,” says Breen. “And because our work is translational, we also have greater potential to translate our findings to humans.”

“This will bring the innovations developed at NC State to a whole new level.”

Today, the National Cancer Institute spends $6 billion on cancer research annually, and it’s estimated that less than 0.5% is directed toward veterinary oncology. But Breen sees his innovations — and those of his colleagues across the nation — as promising steps in the right direction.

Currently, he’s involved in a clinical study in the College of Veterinary Medicine that will evaluate the timeline between when a BRAF mutation is detected in a dog’s urine and when that dog begins to show clinical signs of TCC/UC. Breen hopes this knowledge will lead to earlier intervention, improved quality of life and increased survival rates.

This will bring the innovations developed at NC State to a whole new level.

Recent collaborations with colleagues at Duke Cancer Institute are also exploring the genetic and environmental factors shared between canine and human bladder cancers. A study proposed by this multidisciplinary team was awarded funding from the V Foundation for Cancer Research in 2019. Such comparative oncology studies, Breen says, have the potential to realize the true value that dogs can bring to our fight against cancer.

Through Antech Molecular Innovations, Sentinel Biomedical has begun pursuing more projects to provide rapid, accessible molecular diagnostics for a variety of cancers that impact our pets and ourselves.

For now, Breen is excited to see his work take on a wider reach. These cancer detection tests will help a new generation of canine companions and their human friends (maybe even kids who are experiencing what Breen did as a child). What’s more, the increased volumes of data they’ll collect may unlock insights that lead to the development of new treatment opportunities for cancers in both species.

“Although we may not be able to help all dogs with cancer today, we are driven to learn from their cancers to help the dogs of tomorrow, and the families who care for them,” says Breen.