By 2050, the United Nations estimates, global demand for food will increase by 50%.

The same UN report predicts that many of the inputs driving food production will dwindle or grow too slowly to meet demand: arable land, the agriculture workforce, water and other natural resources.

Rising demand for food. Falling means to produce it. These are existential issues, and research in genetic engineering and biotechnology have yielded potential solutions: robust seeds that resist drought and disease, genetic modifications that neutralize pests, crops that pack more nutrients into the very food we eat.

With each innovation, though, comes intense debate over the moral and cultural implications of genetically modifying the world around us.

“You have this technology that’s situated to really revolutionize agriculture both in the plant and animal side,” said Jennifer Kuzma, Goodnight-NC GSK Foundation Distinguished Professor in the School of Public and International Affairs and co-director of the Genetic Engineering and Society (GES) Center. “So you have this fundamental problem of enthusiastic technologists and skeptical publics.”

NC State has played a key role in developing some of biotech’s most meaningful agricultural innovations. Now it’s pioneering a new, interdisciplinary approach to training the interdisciplinary scholars who will shape the debate in the future.

The Agricultural Biotechnology in Food, Energy and Water Systems (AgBioFEWS) program is showing graduate students the full spectrum of issues in biotech and genetic engineering, from the lab, to the field, to the public square. And it’s an approach that could inform how we seek solutions to other grand challenges. 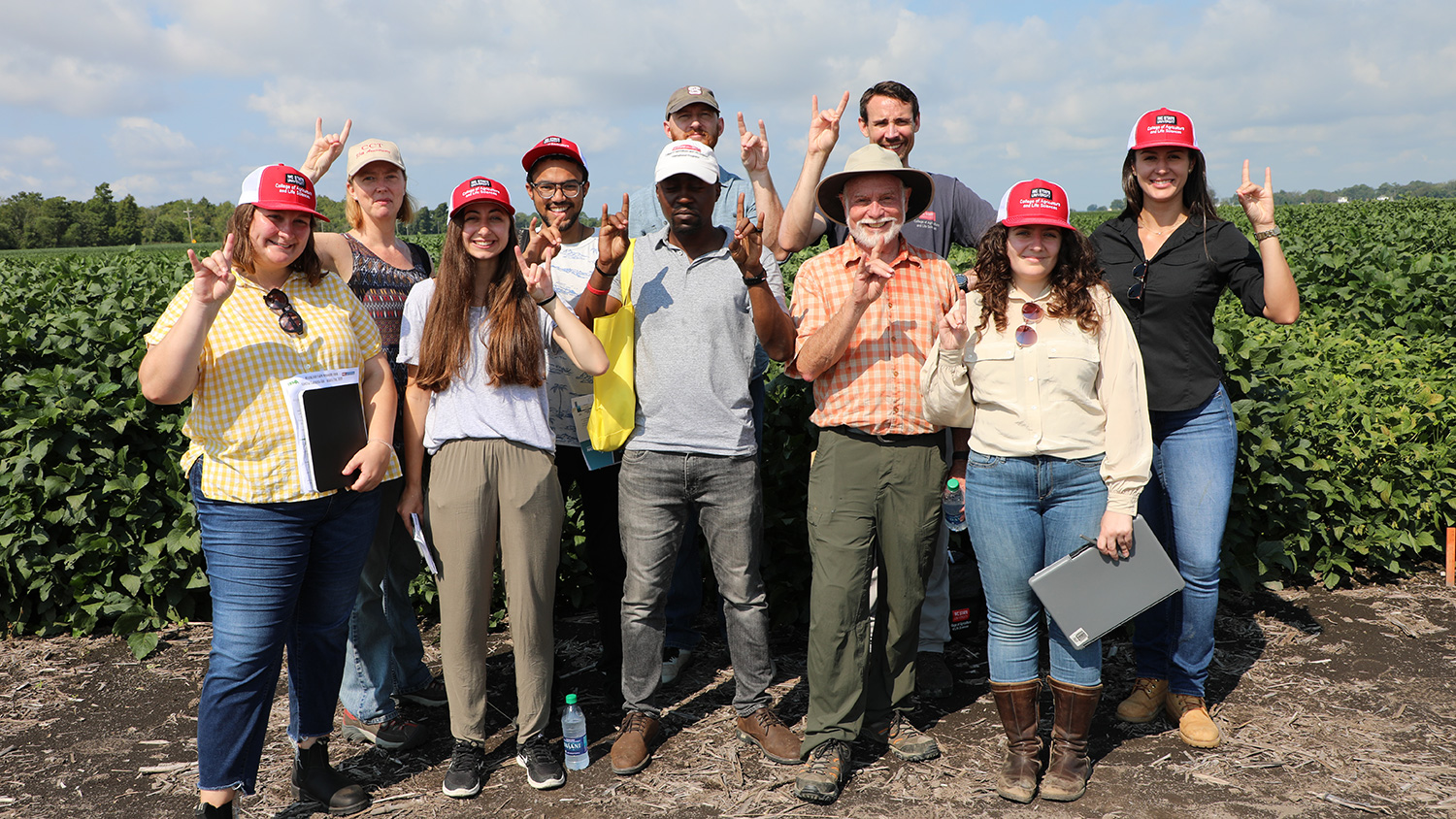 The program welcomes students as Ph.D. Cohort Fellows, as well as offering opportunities for undergraduate students and students pursuing a graduate minor in GES.

“The world is turning into a place that’s more problem-oriented than discipline-oriented,” said Kuzma. “We need a lot of different perspectives to address the challenges we’re facing, and these students are going to be better equipped for those challenges.”

In the first year of a three-year grant from the National Science Foundation, AgBioFEWS has drawn students from across eight disciplines and around the world to pursue doctoral degrees at NC State.

When they graduate, they’ll hold doctorates in their chosen fields and graduate minors in GES. They’ll also have exposure to a wide spectrum of perspectives on the role of genetic engineering and biotechnology in agriculture.

That exposure began in the field. This past summer, students in the first AgBioFEWS cohort spent two weeks traveling through eastern North Carolina and exploring agriculture there. The group visited 10 counties in 10 days, interviewing 11 farmers and hearing lectures from other stakeholders. They walked through fields of corn, cotton and soybeans with the farmers who raise them.

The experience was surprising for some and enlightening for all. The first realization in this exploration of genetic engineering’s role was how little the farmers themselves think about it.

“Few farmers seem to have biotech on their mind,” said Eli Hornstein, a Ph.D. candidate in plant biology, at a talk the students gave after returning to campus. “This is just the world they live in.”

For DeShae Dillard, a first-year graduate student in entomology, seeing the complexity of the farming industry was eye-opening. From choosing what to grow and when to grow it, to financing their farms, to choosing pesticides and coping with climate change, large and small stakeholders juggle a vast array of decisions.

“I didn’t really think about all the work that goes into farming and how intensive it is as a profession,” said Dillard, who grew up in the suburbs of Seattle. “This was a world that was completely different from anything I’d ever imagined.”

This was a world that was completely different from anything I’d ever imagined.

Nassib Mugwanya and Daniela Pezzini brought more familiarity with agriculture to the experience. Before going to graduate school, Mugwanya was a civil servant helping small-scale farmers in his native Uganda adopt new technologies. Pezzini, a first-year doctoral student in entomology, grew up on a soybean farm in Brazil.

“In Brazil I knew one specific type of farmer,” Pezzini said. “Here, I had exposure to small and big farmers, organic and non-organic farmers — farmers with different social backgrounds. The diversity was the most important for me.”

Only field work yields insights like that. Kuzma recalled having a similar epiphany on a visit to a slaughterhouse during her tenure at the U.S. Department of Agriculture in the 1990s. She was there to study foodborne pathogens, but she discovered another complex web of challenges.

“I think I better understood the problems, not only with food safety, but for workers and for animals as well,” she said.

The campus experience will continue exposing students to a variety of ideas, too. Over the next two years, they’ll take one course each semester that views genetic engineering through a different lens. During this first semester, it’s a social sciences class on emerging technologies. In the spring, they’ll study the mechanics of biotechnology, with coursework in mathematical modeling and public policy to follow.

AgBioFEWS students also undertake a group project and participate in a weekly colloquium that features speakers representing a range of opinions on genetic engineering. The fall 2019 speaker list included researchers in law and genetics, artists, and even Booker Prize-winning author Margaret Atwood. Atwood discussed her 2003 novel, Oryx and Crake, in which genetic engineering features prominently.

The colloquium is an essential experience because it challenges students to debate and understand people they may not agree with.

“A lot of these colloquium speakers are very convincing in their arguments,” said Fred Gould, director of the AgBioFews program. “That pushes students to be independent thinkers. I don’t care if a student comes out of the program and is anti-biotech or is totally pro-biotech. But I want them to be able to elucidate why.”

The Infrastructure for Interdisciplinarity

AgBioFEWS builds on a previous program that took a similarly broad approach to the genetic engineering of pest insects. The Genetic Pest Management (GPM) program took students to Peru, Mexico, and oceanic islands to study genetic control of pests that affect human health, agriculture and biodiversity. That program, also funded by NSF, was developed by a team of faculty in the natural and social sciences, as well as humanities.

In the GPM program, students explored the wide range of technological, scientific and societal issues around genetically modifying insects. Those issues are all still relevant today, but the academy’s acceptance of broad interdisciplinarity has profoundly changed.

“When we started, it was thought that if you train them this broadly, they’ll never be good at anything,” Gould said. “And who’s gonna want to hire them? In the end, that wasn’t a problem.”

Eight years later, students from the first cohort have moved on to postdocs, tenure-track positions and roles in industry.

Prospective students have come to expect interdisciplinarity, too.

“It allows us to achieve depth and breadth,” said Michelle Bartolo, a first-year Ph.D. student in biomathematics. “We’re able to go really deep into the field that we’re interested in and also touch on a lot of different fields.”

“You get a chance to interact with the bigger picture,” said Dillard, “and get an understanding of how your work in the laboratory extends past just your university and it affects the larger world.”

The academic establishment’s perspective on disciplinary cross training has evolved since 2011, too. Researchers and funders now seek out programs that unite different fields. It took three years for NC State to get the NSF grant that funded the original Genetic Pest Management program. AgBioFEWS got funded in just one year. That was a testament to the strong interdisciplinary team of faculty at NC State, Gould said.

“Look at the research that’s getting funded and the way companies operate. The big challenges cross disciplines,” Gould said. “You could put a lot of people into a company or into any kind of project who specialize in a diversity of single disciplines, but if they can’t understand each other, they’ll have a hard time solving a big problem. We’re teaching our students how to talk to each other and work together across disciplines.”

We’re teaching our students how to talk to each other and work together across disciplines.

And those skills would be valuable in dealing with a range of other complex issues that sprawl across the disciplinary map: artificial intelligence, climate change, health care, and poverty, to name four.

“There’s room for the same thing we’re doing in genetics to be done in other fields,” Gould said. “There are hard questions everywhere. We know we can do the technical work, but I think we could distinguish ourselves as a university by doing more to bring disciplines across the sciences and humanities together.”