Veronica Catete is the first NC State staff member to win the award that recognizes exemplary service to both campus and community.

Three dozen emoji bounce around a grid on a computer screen, pingponging among icons that look like houses, stores and a hospital. Some are typical yellow smiley faces; others wear face coverings. A handful are green with nausea.

The electronic neighborhood is the work of students from Reedy Creek Middle School and NC State research scientist Veronica Catete. Catete partnered with the Friday Institute for Educational Innovation in 2018 to create a flu epidemic simulation as part of the eighth-grade science curriculum but later adapted it when COVID-19 hit. With Catete’s help, students factored hospital availability, infection rates, quarantining, use of face coverings and physical distancing into their program to gauge how these variables would affect the welfare of a community.

One unlucky emoji transforms suddenly into a skull and crossbones. Not all of them are going to make it.

“Being able to make a lot of these really cool simulations for the science classes has been really fun,” Catete says. “It’s basically testing out some of this curriculum and figuring out what works best for different students and what teachers are comfortable running with their students.”

This is more than just a job for Catete, who works in the Game2Learn Lab and helps K-12 teachers and students integrate computer science into classes. It’s part of her mission to expand access to computer science to those who typically don’t break into the field, such as women, minorities and people from rural areas. It’s a way to show her graduate student mentees that it’s possible to carve out their own paths like she did. And it’s one of the reasons why the UNC Staff Assembly last month awarded her the Erskine B. Bowles Staff Service Award.

The award, which recognizes exemplary service from a staff member to both the university and the community, is one of numerous accolades Catete has won, among them a Microsoft Research Graduate Women’s Scholarship in 2012 and a Graduate Student Leadership Award in 2018. Catete’s nomination calls her someone “who makes our culture better” and offers cultural, professional and educational guidance for students both on campus and off.

“It’s such an honor to receive the award,” says Catete, the first recipient from NC State. “K-12 is my space. I’m just really grateful that I have the opportunity to do things that are meaningful to me and are also meaningful to others.”

Catete remembers the first computer science class she took in her Johnston County high school. She sat alone in a room — not even a teacher was present. There were PowerPoint presentations for her to follow and an online message board for discussions.

It’s the opposite environment in the Infusing Computing program, where Catete holds professional development courses for middle and high school teachers of all disciplines. More than 300 teachers from North and South Carolina have learned simple coding and ways to integrate computing into their classes — not just science and math but history, foreign languages and art.

Catete brings in high school interns to help out with summer training. Everyone collaborates and learns together.

“Many teachers are afraid to code on their own because they don’t know exactly what that entails, but if they ask a high school student, ‘Hey, can you make this?’ they know what they want,” Catete says. “And our high school students, they don’t automatically know how to program that, but it’s a really fun challenge for them to do. Our high school kids are getting excited because they’re getting these new problems they haven’t thought of before. Our teachers are getting really excited because they’re getting some kind of product they could end up using with more people.” 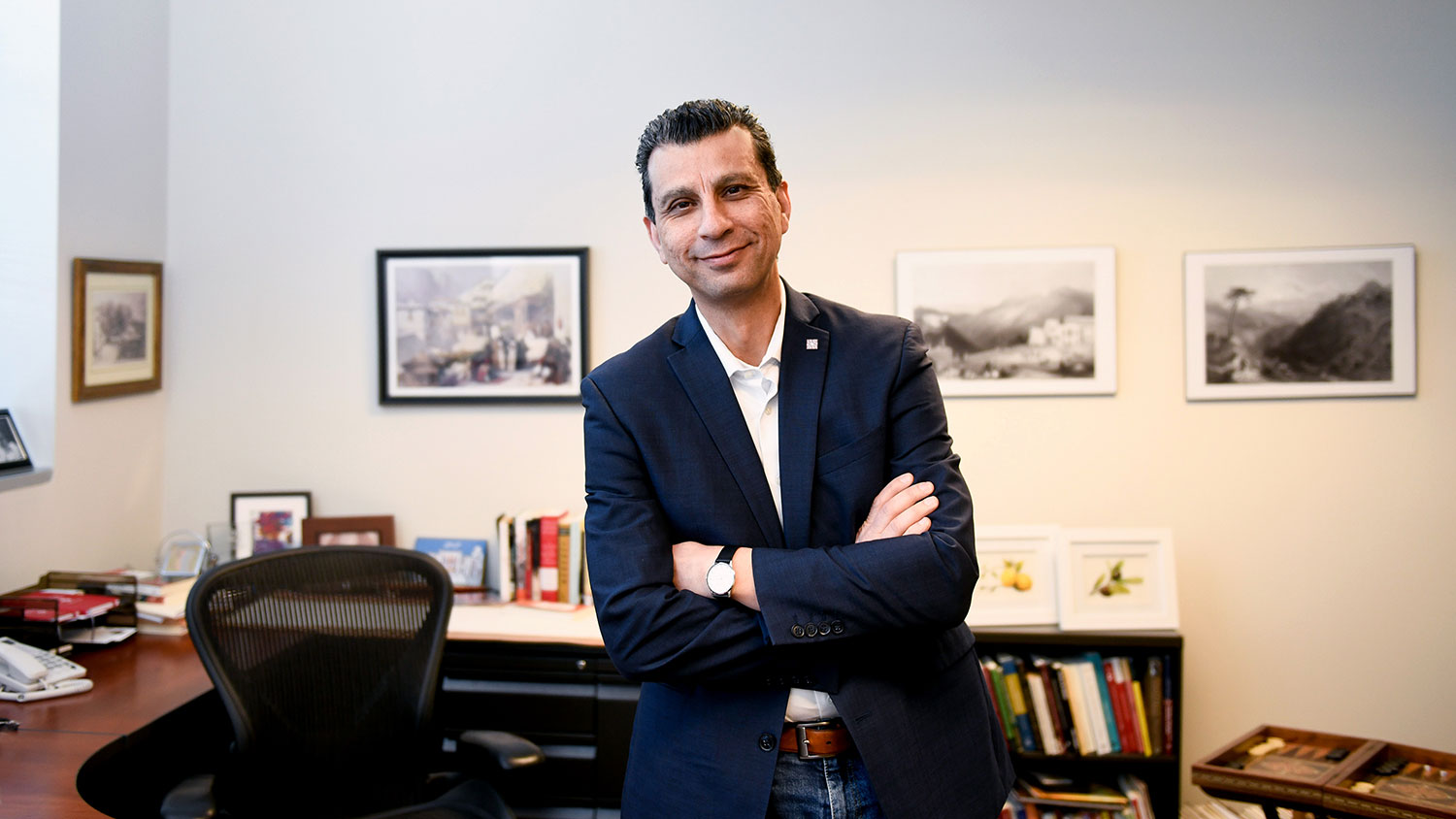 Get to know some of the 9,000 faculty and staff who work in a wide variety of ways — in every corner of campus and beyond — to make NC State a great university.

Catete is looking to introduce another program called CS Frontiers that is geared toward female high school students interested in computer science. She’s developing an in-house curriculum with Vanderbilt University and Looking Glass Ventures, using NetsBlox, a programming environment for young people who want to develop games and animated stories.

Diversity and outreach matter to Catete. She was one of few women in her computer science courses as an undergrad at NC State. She’s the first Latina doctoral graduate from the Department of Computer Science in 20 years, and only the second ever. As a trainer and teacher, she encourages students to create diverse characters and avatars instead of stereotypes, such as the Einstein lookalike that dominated a business education activity. Culture blends with programming to make creative learning opportunities — hair weaving becomes a new way to learn about fractal math and Appalachian Mountain quilts are tools to study pattern recognition and trigonometry.

“One of the things we’ve found is it’s not one size fits all,” Catete says. “Each different pocket or community has different traits or is interested in different things.”

Figuring It Out Together

“It’s not one size fits all” is also Catete’s approach with the graduate students she mentors at NC State. They arrive with different goals, needs and experiences in life, but eventually they share one thing in common: They could use someone to talk to.

“There’s all this unknown. When are you going to graduate? Am I getting a job here or am I getting a job there?” Catete says. “Your family’s asking what’s happening, your partner or your significant other is asking what’s happening. They would like to plan their lives, and you’re that roadblock. Then you feel guilty because you prevent them from moving on, but then you’re also not doing things on your own, and you’re just like … argh. In a constant state of never being able to relax and just stressed the whole time. I have a lounge chair in my office where people can just come and just let it all out.”

Tiffany Barnes, the computer science professor who runs the Game2Learn Lab and nominated Catete for the Erskine award, noted in her submission that Catete has completed training in LGBT advocacy, suicide prevention and awareness, and numerous other programs designed to help student wellness. Thanks to Catete, she says, two grad students experiencing difficult situations last semester were able to pull through them instead of dropping out.

“One of the big things is letting students know it’s OK to take a break or it’s OK to walk away,” Catete says. When one of her students worried about missing a deadline because a family member was dying, Catete was there to offer reassurance and advice: “I am sure you will be more regretful if you missed spending time with them than if you missed this random deadline. There’ll be another conference. There’ll be another deadline.”

Catete also encourages her mentees to pursue their own paths in computer science, just as she did.

“When I started at NC State for grad school, everyone else was technical computer science,” she recalls. “Even though there was a game-based learning lab before, they were like, ‘Oh we’re looking at the effect of virtual agents in this environment’ or ‘We’re looking at this tutorial dialogue agent.’ And I’m like, ‘I’m looking at whether kids were happy in their outreach program.’

“The whole way through my Ph.D. here has been proving to the department and proving to others that what I do matters and that this actually requires a computer science degree to be able to do.”

Now, Catete’s students are reaping the benefits of her experience.

“I have a new student who wants to do social justice with machine learning and computing. We don’t do that here yet,” she says. “But I know we have the resources to do it, and I know that she has the passion to make it happen. So I’m like, ‘I can give you the resources, and we can figure this out together.’”