A Look Inside Reynolds Renovations

There have been a few surprises. Nothing completely out of the ordinary, of course, though the decades-old box of uneaten peanuts kind of threw the contractors off for a few seconds.

Three months into the first major renovation of Reynolds Coliseum since it opened in 1949, everything is on schedule. Ductwork in the hallways of the upper concourse has been removed, prepping for the first permanent air-conditioning system the old building has ever had.

More than 3,000 original seats have been removed from the north end, and are currently on sale as souvenirs through the Wolfpack Club. 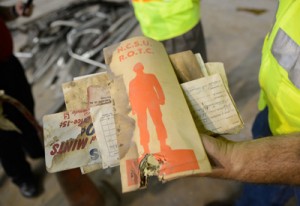 There were a few interesting finds in the old air ducts: newspapers from the 1950s, receipts from Ice Capades shows and an Andy Williams concert in the 1960s, a program for a gay and lesbian rally in 1979 and a few more current ROTC brochures.

Trash or treasure, of course, is in the eye of the beholder.

The permanent wooden floor, installed in 2005, has been removed, revealing the old rubberized Tartan surface that was installed just after head coach Norm Sloan led the Wolfpack men’s basketball team to the school’s first national championship.

For the first time in years, the unique Block S that was a Reynolds trademark was visible again.

The inch-thick surface, poured over concrete and made with trace amounts of mercury, is impossible to remove, so it will be covered again by a new hardwood floor.

There are still a few remnants of the old ice-making equipment that was originally installed in Reynolds when it opened as the South’s first skating rink. That equipment was removed just four or five years later because the humidity in the building caused ceiling tiles to break loose and fall to the floor. 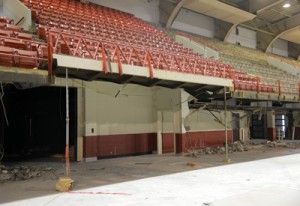 There was one curiosity that few people remembered other than longtime golf coach Richard Sykes, who also once served as the manager for game-day operations at Reynolds. There was a hinged section of seats on the upper westside concourse that could be jacked up to allow entry for oversized objects, such as the Ringling Brothers and Barnum & Baily circus elephants that made an annual trip to Reynolds for decades.

Several interior walls have been removed, including those for the old media room and ROTC classrooms. Other walls will come down in coming weeks and a concrete-eating piece of heavy equipment will begin chomping on the upper grandstands in the north end.

Once demolition concludes, work will begin to renovate the coliseum, moving the permanent basketball floor to the south end and turning the north end into the first home for the NC State Athletic Hall of Fame and the Walk of Champions and History project. Women’s basketball, volleyball and the ROTC programs will get new offices. Follow the progress of the renovation on GoPack.com’s facility enhancement page.

The $35 million project to improve the multi-use facility, which opened in 1949, is expected to be complete in August 2016.