Researchers from North Carolina State University utilized a highly sensitive mass spectrometry analysis to identify and measure difficult-to-detect N-glycan biomarkers associated with ovarian cancers in stages I – IV. In a surprising finding, the researchers determined that the level of biomarkers associated with ovarian cancer does not simply increase or decrease over the course of the disease, but can rise and fall during different stages. These findings have implications for our understanding of, as well as diagnostic and therapeutic approaches to, ovarian cancer.

Ovarian cancer has a high mortality rate, primarily because the disease is difficult to detect in its early stages. The majority of diagnoses – over 80 percent – occur in the late stage, and 70 percent of those cases will be fatal. Scientists know that ovarian cancer metastasis is associated with errors in glycosylation, the process by which a sugar chain attaches to a protein at a specific amino acid. The glycans, or sugar chains, affect a number of cellular processes, and it is difficult to measure differences between normal and cancer-associated glycans in order to determine whether or not they are useful as biomarkers for the disease. 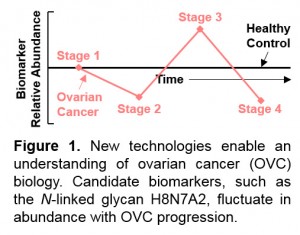 David Muddiman, the Jacob and Betty Belin Distinguished Professor of Chemistry at NC State and corresponding author of a paper describing the work, along with Ph.D. candidate and lead author Elizabeth Hecht and other NC State colleagues, wanted to see if it was possible to measure differences between normal and cancer-associated glycans and identify cancer biomarkers. They obtained 164 blood samples from female patients at the Mayo Clinic:  82 from women who were diagnosed with ovarian cancer, and 82 from cancer-free female patients.

Muddiman and Hecht isolated N-glycans (glycans that attach to proteins at the amino acid asparagine) from the patients’ plasma and prepared them for analysis with mass spectrometry by labeling them with hydrophobic tags specifically designed to enhance the sensitivity of the test. Their method of hydrophobic tagging, known as Individuality Normalization when Labeling with Glycan Hydrazide Tags, or INLIGHT, makes it easier for the glycans to move into a gas phase where the mass spectrometer can “see” them better. Furthermore, by labeling the control and cancer plasma samples with two similar but chemically unique tags, highly accurate measurements could be obtained.

The mass spectrometry results were put into statistical models to determine changes in glycan levels between the control patients and those with cancer. The researchers identified seven N-glycans with different chemical compositions that were statistically significant enough to be considered possible biomarkers.

“This was the first time we had used our INLIGHT strategy with biological samples,” says Hecht. “Our testing was sensitive enough to detect differences between the samples that were as low as 17 percent. Most testing can only detect two-fold changes, or a 100 percent increase. So we’ve been able to demonstrate that it is possible to detect and study, to a fine level of detail, a very hard-to-detect molecule – and that this molecule may be useful as a biomarker for ovarian cancer.”

The researchers also found that number of cancer associated N-glycans did not remain constant over the course of the disease, but could vary from stage to stage.

“It seems that our usual and often unstated assumption about the process of disease – that what we use to measure disease progression should either consistently increase or decrease during the course of the illness – is incorrect,” says Muddiman. “The molecular signature of cancer is not a one-way street.”

Abstract:
An early-stage, population-wide, biomarker for ovarian cancer (OVC) is essential to reverse its high mortality rate. Aberrant glycosylation by OVC has been reported, but studies have yet to identify an N-glycan with sufficiently high specificity. We curated a human biorepository of 82 case-control plasma samples, with 27%, 12%, 46%, and 15% falling across stages I-IV, respectively. For relative quantitation, glycans were analyzed by the Individuality Normalization when Labeling with Glycan Hydrazide Tags (INLIGHTTM) strategy for enhanced electrospray ionization, MS/MS analysis. 63 glycan cancer burden ratios (GBRs), defined as the log10-ratio of the case-control extracted ion chromatogram abundances, were calculated above the limit of detection. The final GBR models, built using stepwise forward regression, included three significant terms: OVC stage, normalized mean GBR, and tag chemical purity; glycan class, fucosylation, or sialylation were not significant variables. After Bonferroni correction, seven N-glycans were identified as significant (p < 0.05), and after FDR correction, an additional four glycans were determined to be significant (p < 0.05), with one borderline (p = 0.05). For all N-glycans, the vectors of the effects from stages II-IV were sequentially reversed, suggesting potential biological changes in OVC morphology or in host response.