As North Carolinians adjust to cooking more at home instead of going out to eat, Allen Boyette has an important message to share.

“There is not a broad food shortage in North Carolina or across our nation,” he says. “There is reduced variety, if you will — we may not be able to get exactly what we’re looking for, the type of chicken or the type of pork. Everybody must understand it’s not a crisis where we don’t have food right now, it’s just that you may not get it exactly how you want it.”

Boyette heads the Food Supply Chain Working Group, a panel of industry experts, members of the agricultural community and government officials the state brought together last month to address food production and distribution issues during the COVID-19 pandemic. The group is examining every angle of the subject, from farm to fork.

It’s not his area of expertise, but Boyette was approached for his leadership and organizational abilities, honed from years as senior director in the Facilities division at NC State and as a brigadier general in the North Carolina National Guard. His job is to establish priorities, facilitate cooperation and do his best to make sure the state stays fed. He has help from another member of NC State, Mike Yoder, associate director and emergency programs coordinator for NC State Extension.

“The group is phenomenally professional, and everybody wants to solve these challenges,” Boyette says. “It’s just sometimes hardest to figure out the best way to accomplish those tasks.”

In the Short Term

One of the first things the group realized was that demand for food from North Carolina’s at-risk population rose as the pandemic worsened. Remote learning means children can’t count on lunch at school. Job insecurity pushes more people to food banks. When grocery stores run out of products, elderly people and those with disabilities may find it harder to access food. The food supply chain group went to work to help charitable organizations, assessing each one on a case-by-case basis.

“Each group needed something a little bit different,” Boyette says. “Some groups are getting a lot more food in because donations are up, but they needed forklift operators. Then some places needed truck drivers to drive large tractor-trailers to pick up food and deliver it, and drive the refrigerated trucks.”

Luckily there’s a reliable source of help in times of domestic crisis: the National Guard. Hundreds of soldiers mobilized to provide assistance, says Boyette, who has served for 32 years.

“That’s a resource with qualified truck drivers, qualified forklift operators and just people power that can come in and take care of some of these tasks to keep the food moving out to the folks,” he says. “That’s still ongoing at many of the food banks across the state and probably will be for several weeks.”

Boyette encourages people to reach out to their local food pantries to offer help, but he says mindful shopping habits will make a big difference.

“Talking to a lot of the industry experts in this, there’s not a shortage, but what creates a shortage is some overbuying of particular products,” he says. “You’ve seen it with the toilet paper and paper towels. Something will come on the market, and people will feel like they’ve got to get a grocery cart full of it, which then creates the issue. Let the system work itself out to get the product where it needs to be.”

The food supply chain worked well before the pandemic, Boyette says, partly because it saw relatively few changes. Domestic demand and exports were generally stable, farms had a good idea of how much to produce and consumer habits didn’t fluctuate wildly.

“Now, with things shifting so drastically, a lot of that predictability is gone,” he says. “Farmers are trying to decide how much to plant. Canners are trying to figure out whether to can vegetables in small cans for grocery stores or great big cans for restaurants.”

According to Yoder, the restaurant industry is operating at about 20% of capacity, meaning suppliers have had to get creative in order to sell. House of Raeford, a poultry farm based in Rose Hill, North Carolina, was at the State Farmers Market last month selling 40-pound cases of chicken.

“That was a creative way to figure out how to make a little bit of money by selling the product to the public who needs it,” Boyette says.

One of the group’s goals is to figure out how to make the food supply chain more resilient. Take animal processing plants, for example: They are large, which is good for efficiency, but what happens if they shut down?

“I don’t claim to have any easy answers,” Boyette says, “but I think it’s something that our state and nation have to look at and figure out how to move forward.”

Amid all this, Boyette still has his day job. Campus is mostly empty, but some buildings are still operational. Boyette and his team in Facilities ensure lights, air-conditioning and heat are being used as efficiently as possible.

“Allen Boyette does an incredible job balancing his roles,” says Associate Vice Chancellor Doug Morton. “He has equipped his team in energy systems to focus on the most important tasks to keep the university running.”

Boyette is used to the balancing act. He has a career, a family and has served with the National Guard both overseas and in his home state. The pandemic may be a first-of-its-kind crisis, but it’s not his first crisis, and he’s staying optimistic.

“Our state and our nation have seen some pretty tough times,” he says. “I think we’re going to figure out how to work through this and hopefully come out on the other side — whenever that may be — strong, better and more prepared for the future.” 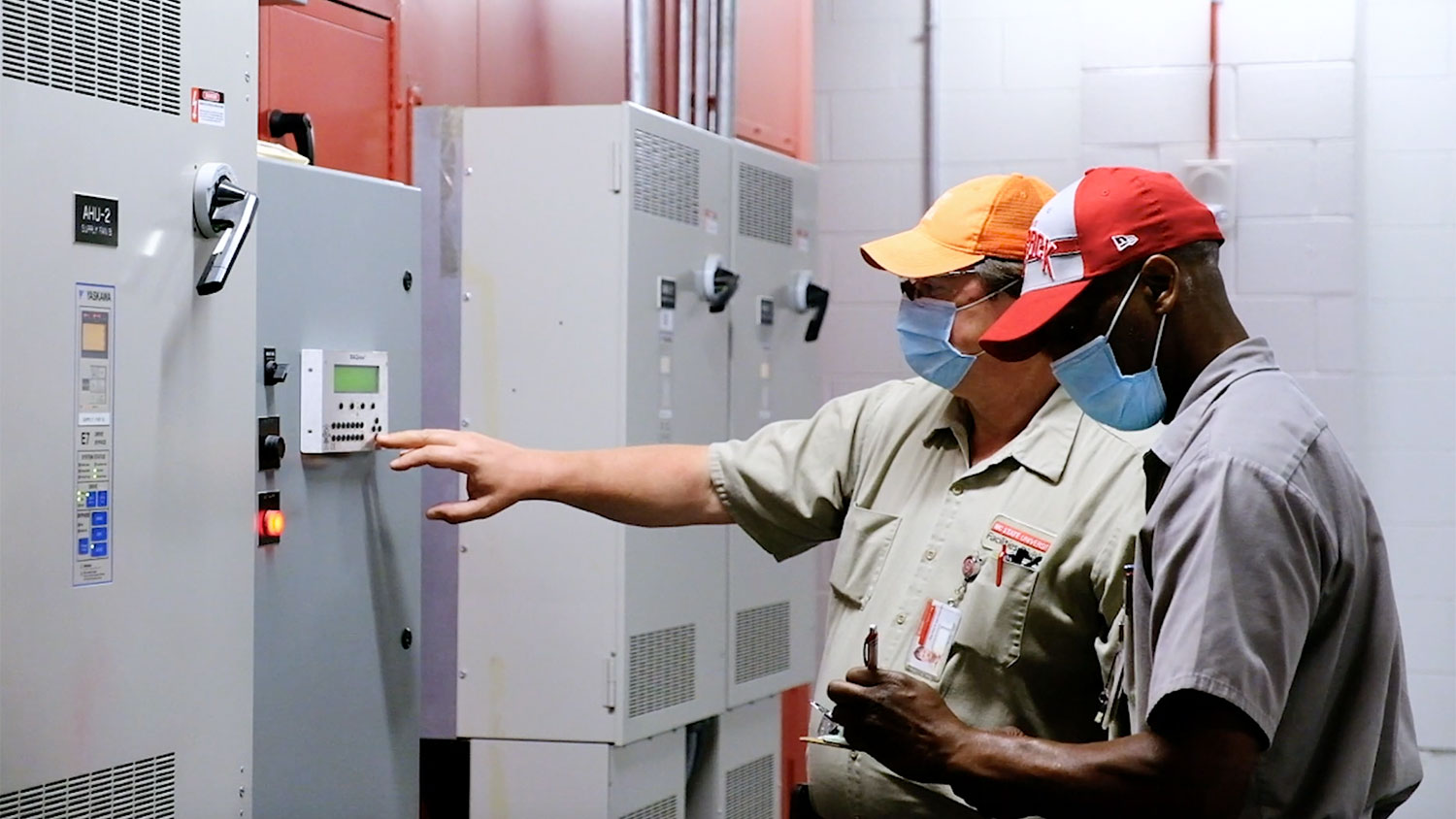