And that’s the goal of a unique one-week selective class taught annually by NC State professors Craig Harms and Gregory Lewbart at the Center for Marine Sciences and Technology (CMAST) in Morehead City.

In an all-day class in a research and clinical lab at the center, 14 third-year and four first-year College of Veterinary Medicine students work in pairs not only to learn the proper technique to put a two-pound striped bass under, but also to do exploratory surgery and then suture them up again.

CMAST is the university’s coastal research lab, located on the campus of Carteret Community College, one of many sites around the state, country and world where students learn away from the university’s primary campus in Raleigh.

The center, overlooking the banks of Bogue Sound, collaborates daily with similar academic centers operated by UNC-Chapel Hill, Duke, UNC Wilmington and other coastal agencies and provides research and educational opportunities for NC State students in multiple fields of study. 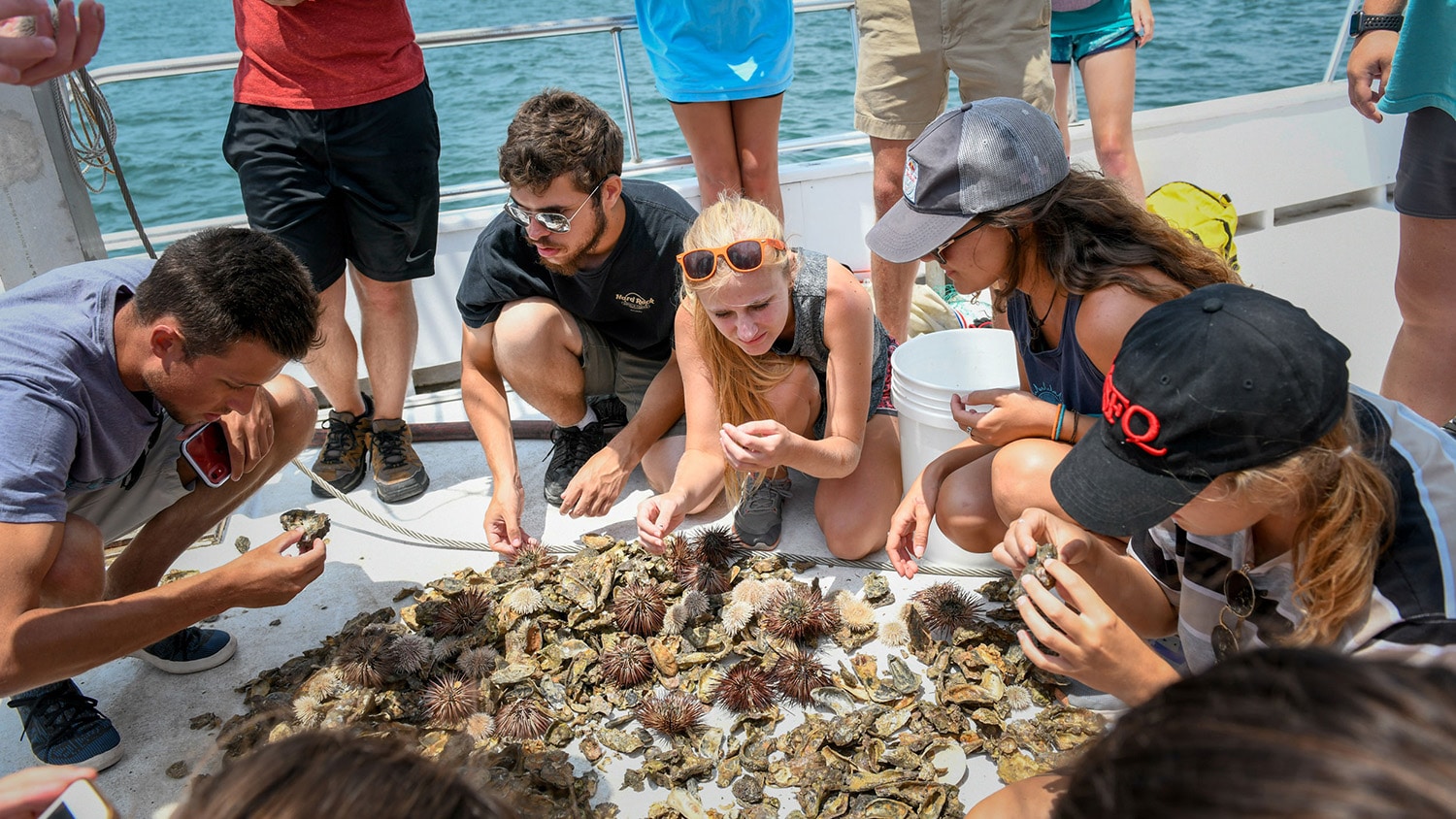 Campus at the Coast

About 150 miles from Raleigh, NC State’s Center for Marine Sciences and Technology is offering students unique experiences and furthering the university’s research and outreach mission.

Harms, the director of CMAST’s Marine Health Program since the physical location at the coast opened in 1999, not only oversees the teaching program, but also provides veterinary oversight to the Karen Beasley Sea Turtle Rescue and Rehabilitation Center and several marine mammal and sea turtle stranding networks. And he supports local laboratories, as well as the NC Aquariums.

“When I was first based down here, people were always asking me what a veterinarian was going to do at a marine lab,” Harms says. ““The truth is, we have more happening here than we can keep up with.”

Lewbart, a professor of aquatic, wildlife and zoological medicine, first met Harms in the early 1990s and began teaching the fish surgery class with him in Raleigh in 1998, working first on pet fish such as koi. Through the years, they have done abdominal surgeries, CT scans and biopsies and other procedures on a variety of species, from catfish to striped bass, all of which are part of the $1.3 billion global ornamental fish market.

“Fisheries biologists do this stuff all the time,” Lewbart says. “To track fish, you can’t put a transmitter on the outside. Fish don’t tolerate anything on their skin, so they open them up, slip in a radio transmitter and are able to track the fish.”

That kind of work, however, was never done in a teaching environment. Usually, it was done on the deck of a boat, just about the least sterile setting possible. The class Harms and Lewbart teach offers a unique learning opportunity for students who may treat pet fish in a private practice or may do aquatic and marine mammal care at a display aquarium, like the ones at Pine Knoll Shores, Fort Fisher or Roanoke Island, the three main sites for the NC Aquariums.

“When we first started this, many aquariums didn’t have full-time veterinarians,” Lewbart says. “And the ones that did were working on marine mammals, birds and reptiles, not fish. We have seen a big shift in that the last 30 years.

On a specific day in April, the 18 CVM students taking this semester’s intensive class gather in a first-floor staging room/wet lab at the three-story CMAST building. Each working pair carefully selects a striped bass that has been harvested and donated by the NC State Marine Aquaculture Research Center about 25 miles away in Marshallberg and sent to the CMAST lab.

The fish are anesthetized with solution of fish sedative and water in a five-gallon bucket under the guidance of CVM anesthesiologist Julie Balko, then intubated with a plastic tube in the mouth that keeps a flow of water going through the gills of the fish, which are placed on their backs on a plastic box that stabilizes them and drains and recirculates the water throughout the process.

(Harms and Lewbart developed the basics of the portable fish anesthesia device years ago when a zoo in Nebraska asked them to demonstrate their techniques. That portability eventually enabled them to move the surgical class from Raleigh to the coast.)

Students make an abdominal incision on the underside of the bass, which are then covered with a plastic surgery drape to keep their skin and scales wet. Students take blood and tissue samples for both external and internal biopsies that they complete in an upstairs classroom later in the day.

The fish are carefully sutured back together, just as a pet might be in a private practice after a similar exploratory procedure or a herd fish might be after having a transmitter inserted for tracking. At the end of the instructional period, the fish are euthanized while still under anesthesia.

A Soft Spot for Fish

For Jamie Slater, a graduate of UNC Wilmington in her third year in the CVM program, cutting open a fish and suturing it back up is a dream come true.
Really.

Growing up in Cleveland County, she was far removed from coastal waters when she started filling her first fish tank with exotic species. She got deeper into the hobby when she got her first salt-water tank.

Then, as a college student, she had a part-time job in an aquarium store as she pursued an undergraduate degree in biology with a minor in chemistry.

“That’s when I found out that more fish died than were actually being sold,” Slater says. “The hobby made me start thinking about going to vet med school, but I didn’t realize until I got here that I could actually work with fish.

How excited? She has a channel catfish and a brook trout tattooed down the length of her right arm.

Like all vet med students, Slater has done surgical procedures on other animals.

“I’ve operated on a donkey, a cat, a dog — all of which were castration or spaying,” she says. “I operated on a goat once and did a rumenotomy on a cow.

“I have to say, though, fish are my favorite.”

That’s exactly what Harms — a native of Iowa and a graduate of Iowa State — wanted to hear when he developed this intensive veterinary class at NC State’s marine lab, which has few peers among vet med colleges across the country.

“I would have killed to have something like this when I was in school,” he says. 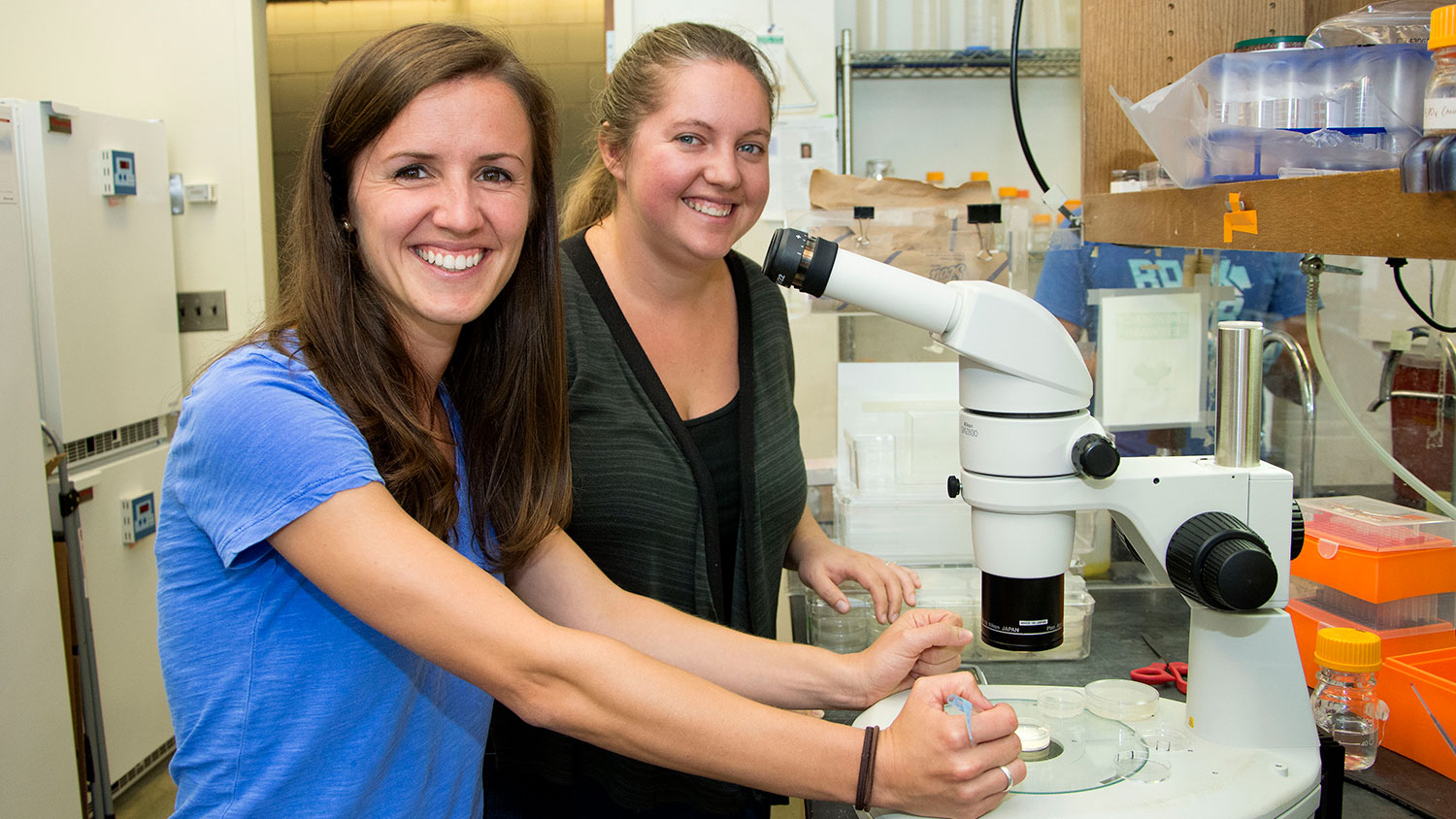