NC State alum Roxanne Vogel trained and worked in a low-oxygen chamber for three months before scaling the world's highest peak in record time. Next up: Antarctica's Mount Vinson.

It’s not that co-workers don’t want to be around the energetic 33-year-old NC State graduate, a nutrition and performance research manager at GU Energy Labs/Advanced Food Concepts in Berkeley, California.

It’s that they don’t want to pass out.

As part of her three-year training project to do something no other person has ever done — travel to Tibet, scale Mount Everest and return home to California in fewer than 14 days — Vogel worked in a closet-sized hypoxia chamber next to the company’s fitness center that simulated oxygen levels of 11,000 feet. She also slept in a bubble-like altitude tent that pumped in oxygen-reduced air, working her way over a three-month period to sleeping in oxygen levels of 20,000 feet.

“People would come into my office and start losing their thoughts and getting light-headed after a few minutes,” she says. “It keeps meetings pretty short.”

Preparing for the ‘Death Zone’

Acclimating to the low-oxygen, high-altitude atmosphere of Mount Everest’s 29,029-foot summit is what usually makes the trip up and down the hill last 60 or more days for most climbers. Those going up the more common route from the Nepal side usually spend up to four weeks at base camp before trying to navigate the Khumbu Icefall, spending multiple nights at each of the other three camps inside the “death zone” of over 26,000 feet (where most people can’t get enough oxygen to breathe) and then making a final push for the summit with the aid of air tanks.

Overcrowding, limited facilities and the lack of oxygen often diminish climbers’ strength long before they ever try the most difficult climb of their lives and exhaust them as they descend the mountain.

Climbing Everest has been problematic this spring, with overcrowded conditions and 11 reported deaths, the most in two decades. The National Geographic image of the long line of climbers wearing multicolored gear stretching from the Nepalese south ridge of the mountain clearly illustrated the danger of this year’s climbing season.

That’s the day Vogel reached the peak, becoming one of 600 or so women to ever stand at the top of the world.

Her climbing team of four people went up the less crowded, but more challenging, north ridge from Chinese Tibet. By the time she reached the peak at 11:45 a.m. on May 22, wearing her Wolfpack red climbing suit, there was no one to be seen other than climbing partner Lydia Bradey and Sherpas Mingma Tshering and Pasang Tendi.

She got her standard pictures at the top of the world, completing a dream seven years in the making. But to finish her 14-day goal, she barely had two days to get halfway around the world. She hustled back to her elevated camp for a few hours of sleep, descended to base camp and waited two hours for a van to pick her up for an eight-hour ride to a Tibetan airport. Three flights later, she was greeted at the San Francisco airport by family, friends and co-workers, who celebrated for a few moments before rushing her home.

She walked in the door with one hour to spare.

“It’s definitely the hardest thing I’ve ever done in my life,” says Vogel, who has now scaled six of the Seven Summits (the tallest mountain on each continent) and who plans to climb Mount Vinson in Antarctica in December before completing the “explorer’s grand slam” with trips to the North and South poles. 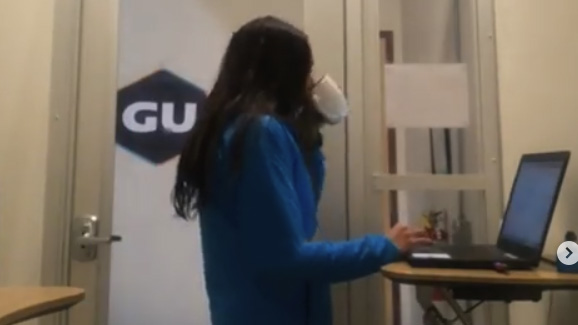 Day at the Office

Roxanne Vogel takes us inside her hypoxia chamber work space.

(Read her company blog about preparing for the Everest climb and the Washington Post story about her journey.)

Vogel followed a “lightning ascent” training protocol suggested by noted climber Adrian Ballinger. She collaborated with Alpenglow Expeditions of Squaw Valley, California, to develop the programs, which cuts the typical climber’s time to scale the mountain in half. Most need more than 60 days to acclimate to the extremely low oxygen levels over 20,000 feet.

Vogel isn’t the typical climber, at least not until she became a world-traveling alpinist shortly after graduating from NC State with a degree in communication and media studies in 2007.

A native of San Diego, Vogel followed a friend to enroll at NC State in 2004. She fell in love with Raleigh and North Carolina’s beaches, spending seven years here in school and her first job. An avid ultra-marathoner and fitness enthusiast, Vogel trekked to Mount Everest basecamp in 2012 before she ever climbed a mountain.

She gave up a full scholarship to graduate school at East Carolina and moved to Colorado to learn proper climbing techniques. She spent two years with AmeriCorps’ Coach Across America, teaching literacy, service-learning and soccer to 300 at-risk youth in Denver while earning a second bachelor’s degree in human performance and sport from Denver’s Metropolitan State University in 2014. She then earned a master’s degree in exercise and sports nutrition from Texas Women’s University in 2016. She’s currently working on her Ph.D.

While in Denver, she began scaling the tallest peaks on the planet. Last year for vacation, she made the summit of three 19,000-foot Ecuadoran peaks in just five days.

Vogel’s two-week rapid ascent method, under the careful guidance of Alpenglow, may forever change how climbers prepare to scale the world’s tallest peaks, cutting out most of the time needed for high-altitude acclimatization.

And working from a hypoxia chamber to shorten meetings isn’t a bad idea, either.