Teaming up with NC State researchers, Brad McCoy found an innovative solution to extend the life of our state's ailing bridges.

There are hundreds of bridges across North Carolina — and thousands across the country — that are, frankly, in rough shape.

They can’t carry as much weight as they used to, and transportation officials can’t replace them as quickly as they’d like. But researchers from NC State have come up with a way to retrofit many of these bridges — restoring their lost capacity and buying planners time to put a long-term solution in place.

All sorts of bridges are aging — and not gracefully. But NC State’s new retrofit solution was developed specifically for use on bridges made with pre-stressed concrete beams.

Pre-stressed concrete beams are among the most commonly used materials for bridge construction. They’re made by stretching steel strands until they are under thousands of pounds of tension, then casting concrete around the strands.

Once the concrete has set, the tension is released from the ends of those strands. The strands then try to snap back into shape, and that force compresses the surrounding concrete. The force is powerful enough to bend the concrete, putting a slight arch, or camber, in the beam.

The taut steel strands resist tension along the bottom of the beam, and the concrete resists compression at the top — this is what makes the beams (and the bridges) so strong. If those two forces become unbalanced, the beam loses capacity, meaning that it can’t support as much weight. Which is, of course, not what one is looking for in a bridge.

Over time, the inner steel strands can be exposed to external chemicals, such as road salt. This causes the strands to corrode, expanding the metal and damaging the surrounding concrete. This further exposes the steel strands, speeding up the corrosion process. Unsurprisingly, corrosion can cause the steel strands to lose their tension, weakening the beams. Another frequent problem is damage to steel strands that occurs when over-height vehicles run into bridges — which happens more often than you might think.

What all this means is that a bridge designed to carry 15-ton loads may now only be able to carry 12 tons, or less. When that happens, transportation officials post a new load restriction on the bridge.

In other words, the bridge would still be safe for lighter vehicles, but heavier ones — such as school buses, dump trucks and agricultural equipment — may have to take detours. And those detours can be costly, in terms of both time and money.

Enter Brad McCoy, a lieutenant colonel in the U.S. Army Corps of Engineers who, in 2016, began a three-year Ph.D. program in civil engineering at NC State.

A cost-effective solution to an expensive problem

Working with researchers in NC State’s Department of Civil, Construction and Environmental Engineering, McCoy has come up with a retrofit solution for breathing new life into old bridges.

“By attaching pre-stressed fiber-reinforced polymer plates to these bridges, we are able to restore the bridges to their original load-carrying capacity, making them passable again for larger vehicles,” says McCoy, who graduated on May 10 and is now a professor teaching civil engineering in the Department of Civil and Mechanical Engineering at the U.S. Military Academy.

“This retrofit solution is designed to restore that carrying capacity for at least three to five years, giving transportation officials time to plan, budget and construct permanent repairs or bridge replacements.”

The plates in question are long, thin, rigid panels — only 4 inches wide and an eighth of an inch thick — that are made up largely of carbon and glass fibers encased in a waterproof polymer.

“These plates are already commercially available, and we can get them in the lengths we need,” McCoy says. “That’s a significant advantage, because we don’t need to create something from scratch and then find a way to scale up production. Although the plates have been available for several years, we are the first to pre-stress this material to restore load-carrying capacity to pre-stressed concrete bridges.”

Installing the plates quickly is important, because shutting down a bridge interrupts traffic.

What’s more, McCoy and his collaborators have developed a system for putting this solution in place that should allow transportation officials to retrofit a bridge in one to three days, depending on the size of the bridge.

“Installing the plates quickly is important because shutting down a bridge interrupts traffic,” McCoy says. “We want to make sure that this solution restores traffic quickly and uses as few labor resources as possible.”

The researchers have tested the relevant materials exhaustively on a small scale, and are now testing it on a large scale — a very large scale — in NC State’s Constructed Facilities Lab (CFL).

“We’re testing concrete girders that were previously in service on North Carolina bridges, provided by the NC Department of Transportation (NCDOT),” says Greg Lucier, who manages the CFL.

The researchers have already tested C-channel girders, which are found in bridges around the country but are no longer common in new construction. C-channel girders are 30 feet long and weigh 4 tons, which gives you an idea of the scale of the testing. And the results have more than met expectations.

For example, one of the C-channel girders tested in the CFL was so damaged that it was down to just below 70% of its original operating load capacity — which is what is used to set limits on the size of vehicles that can cross the bridge. 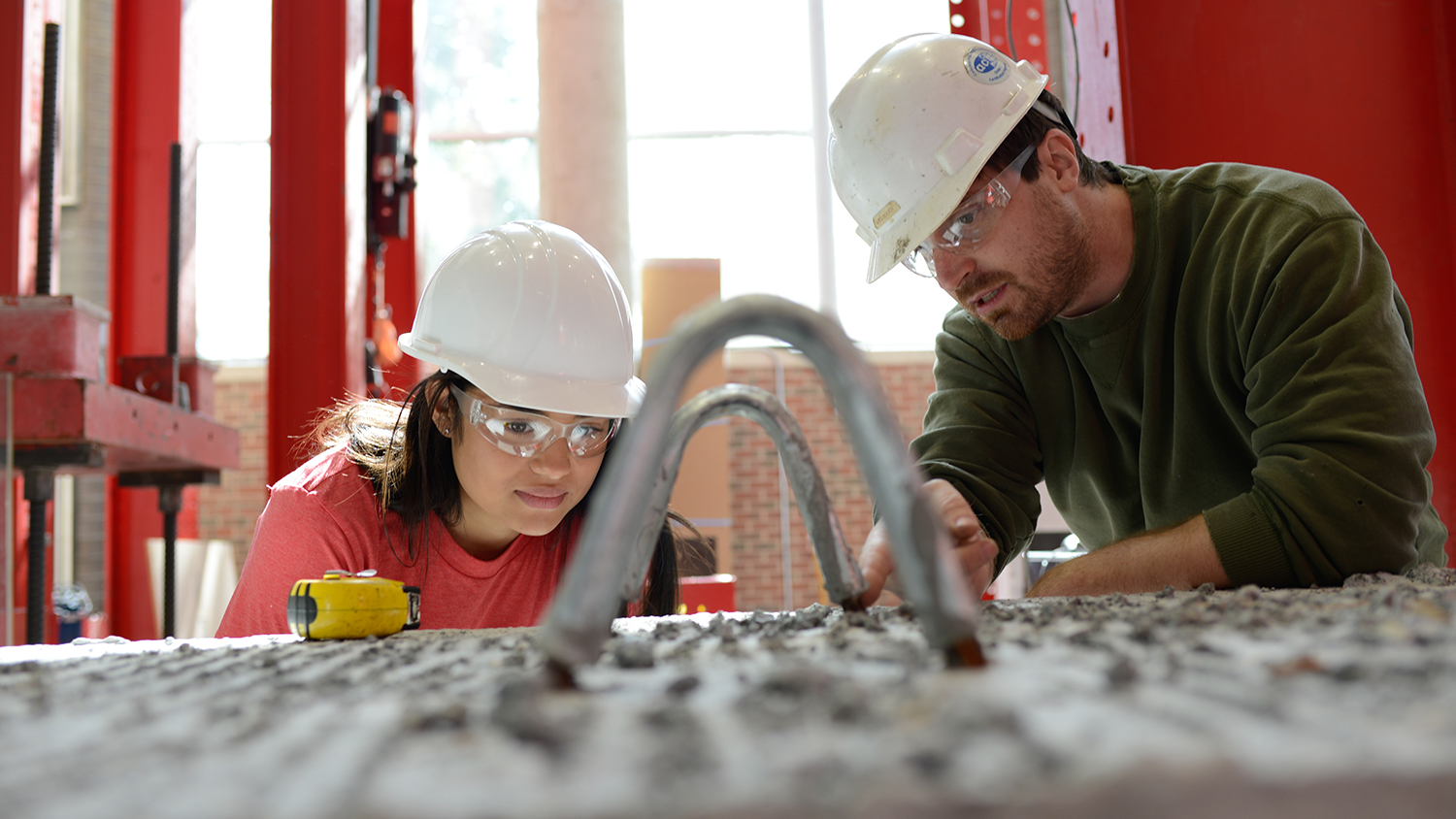 For students and researchers in the CFL, failure is an option. In fact, it leads to vital insights that protect our infrastructure.

But after applying the retrofit plates, the NC State researchers found that they could actually increase the girder’s operating load by 15% over the operating capacity that it had prior to deterioration.

“This is a success,” McCoy says. “We can either return the girder to its original operating load or increase it, depending upon the needs of the bridge, and the resiliency increases either way. Our goal was to restore full function for three to five years. And the technique we’ve developed both restores full function and gives the NCDOT time to replace the damaged infrastructure while minimizing the impact on the local population and industry.”

Our goal was to restore full function for three to five years.

The CFL team is now testing hollow core slab girders, which are larger than C-channels, coming in at 40 feet and 7.5 tons. These are also in widespread use and are still used in new construction.

In the meantime, engineers are already moving their work out of the lab.

In April, McCoy and a maintenance team from the NCDOT installed the retrofit plates on a two-lane bridge in Franklin County. The bridge had deteriorated to the point that concrete had crumbled away, exposing sections of the steel strands near the middle of the bridge.

“This is real-world testing,” says Lucier, who is a research assistant professor of civil, construction and environmental engineering at NC State. “And when this bridge is replaced — in six months — we’ll be able to bring these beams into the CFL to do tests on how the retrofit system performs when in service.”

This is real-world testing.

“NCDOT maintains over 13,000 bridges across the State of North Carolina,” says Neil Mastin, research and development manager at NCDOT. “Managing such a large network requires many tools to maximize limited resources and provide the public with a safe and functional highway system. Our research program and partners at NC State are a key component of expanding that tool set. This research project opens up the potential to extend the useful lifespan of a bridge until it can be replaced. We look forward to additional work on innovative infrastructure solutions from the team at NC State.”

“We’re excited to see the efforts of our research have a real impact,” McCoy says. “This new methodology is a cost-effective solution that can extend the useful life of existing infrastructure with minimal labor and material resources. And it is at a time when economic, environmental and social impacts are of utmost importance as we work to increase the overall sustainability of our nation’s infrastructure.”

Climate Change May Cut U.S. Forest Inventory by a Fifth This Century