The last remaining C-permit parking spaces on the north side of the railroad tracks on NC State’s main campus will be eliminated in coming weeks to make way for a new upscale apartment complex in the old Hillsborough Square location.

The project is part of a $160 million facelift for Hillsborough Street, NC State’s northern boundary, including another $10 million in the second phase of street improvements by the city of Raleigh.

The five-story apartment building will be constructed by a private developer diagonally from the Memorial Tower on the Hillsborough Street roundabout, across from a new 135-room Aloft Hotel, which is slated to open later this summer.

NC State’s Board of Trustees Endowment Fund acquired Hillsborough Square in 1980 and the Belltower block, site of longtime residents Sadlacks and Schoolkids Records, in 2008. Those businesses were relocated.

The hotel site, between Enterprise Drive and Maiden Lane, is part of a 50-year lease with Bell View Partners, developer of the Aloft. The parking lot site has been sold for about $800,000 to Bell Curve Partners for development. And the city of Raleigh purchased some of the land for about $900,000 to make way for multiple roundabouts in that area as part of the first phase of street improvements.

All told, the endowment fund will realize about $4 million from the sale and lease of those parcels, according to Ralph Recchie, the university’s director of real estate.

For those who work on campus, however, approximately 60 C spaces will be eliminated, 33 on the actual site of the apartments and 15 on the Oberlin Street spoke between the two roundabouts between the hotel and the Hillsborough Square location. There are no current plans to create new C spaces or to reallocate B or UD spaces on the north side of the tracks between Pullen Road and Dan Allen Drive, according to NCSU Transportation.

“The loss of those parking spaces is unfortunate on our most densely developed part of campus,” Recchie said. “It does create a tough capacity issue.”

NCSU Transportation has some suggestions to alleviate the inconvenience caused by the loss of C spaces for faculty and staff. 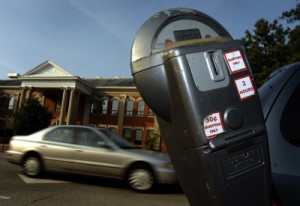