NC State’s new Compost Facility and Research Cooperative diverts organic waste from the landfill, giving it new life in a number of beneficial ways on campus.

Say you toss an apple core into a compost bin at the Talley Student Union. In a few months, it will return to campus — in the form of nutrient-rich compost that helps grow vegetables for the dining halls and nourishes landscapes and sports fields.

Located on 3 acres off a winding dirt road at the Lake Wheeler Road Field Labs, the new facility can process up to 1,200 tons of organic waste each year.

“Once the organic waste is collected from dumpsters on campus, we transport it to the compost facility, where it’s unloaded under a hoop structure,” he says. “From there we mix it with animal bedding supplied by the Vet School. This is an excellent carbon source, which is needed to start the composting process. Then it goes into a bay with perforated PVC pipes recessed into the floor that circulate air from a blower to aerate the piles. For 18 days, these piles heat up and break down the waste into compost.”

After that, the compost is placed into new piles on a nearby pad, where it cures for several weeks. Then it’s screened and tested for nutrient analysis and pathogens. After this rigorous process, the compost is delivered to NC State’s Agroecology Education Farm to grow produce for NC State Dining or to the Facilities Division to enrich the campus landscape.

Now, back to that apple core. After it travels through this process, it gains a second life. This concept of multiple — or really, infinite — lives for food scraps and other organic waste is, as Bensley says, “the closed-loop system in a nutshell.”

He credits Matt Ball, “our phenomenal compost facility operator,” with keeping everything running smoothly and efficiently.

The new compost facility is the largest university-operated system of its kind in the Southeast. And it’s getting even bigger, having recently received a Sustainability Fund grant to increase processing capacity by 40%.

Although the facility is currently under reduced operations in response to COVID-19, Bensley and his team are hosting a virtual open house in celebration of Earth Month. Register online for the April 23 event.

The vision for the compost facility took root after a 2015 waste characterization study conducted by Waste Reduction and Recycling revealed that 38% of campus landfill waste is compostable.

NC State Dining also had discovered that 70% of the trash generated at Fountain Dining Hall was compostable, says Keith Smith, director of dining halls and sustainability.

“That’s when we partnered with Waste Reduction and Recycling to set up the ability to compost food scraps from the dining halls,” Smith says. “This allows Dining to support the university’s sustainability goals to reduce, reuse and recycle whenever possible.”

At the time, the university was sending most of its organic waste to a commercial composter in Chatham County.

“We were paying to dispose of the organic waste, and then buying it back as compost to use in the campus landscape,” Bensley says. “So a study was conducted to find out if composting food waste would be feasible at NC State.”

After the study revealed that not only was it feasible, but it also would be more cost-effective and beneficial than the existing process, Bensley and his team took their findings to the NC State Stewards. The student sustainability group quickly got on board with the idea of an on-campus compost facility, and together they applied for and won an NC State Sustainability Fund grant to launch the project.

A grant from Wake County provided an additional boost, but the proposed facility still didn’t have enough funding to break ground within the timeframe of the Sustainability Fund grant cycle. So NC State Student Government passed the Compost Facility Support Act in 2017, which paved the way for construction.

“This facility is a milestone achievement,” says Heather Cashwell, program manager for Waste Reduction and Recycling. “It will play a big role in helping the university achieve its ultimate goal of diverting 70% of all waste from the landfill. It’s a game-changer.”

Doug Morton, associate vice chancellor for the Facilities Division, says the new compost facility plays a key role on campus and beyond.

Students can participate in internships, class tours and academic projects. The facility’s leadership also partners with NC State faculty to support research projects. And the facility serves as a resource for those who want to learn more about large-scale composting.

“We are a land-grant institution charged with developing practical solutions for the state’s citizens, and the compost facility does just that,” Cashwell says. “We aren’t just making a good soil amendment; we are rethinking waste as a resource and engaging in research to find future uses of compost that will have positive environmental and economic benefits.” 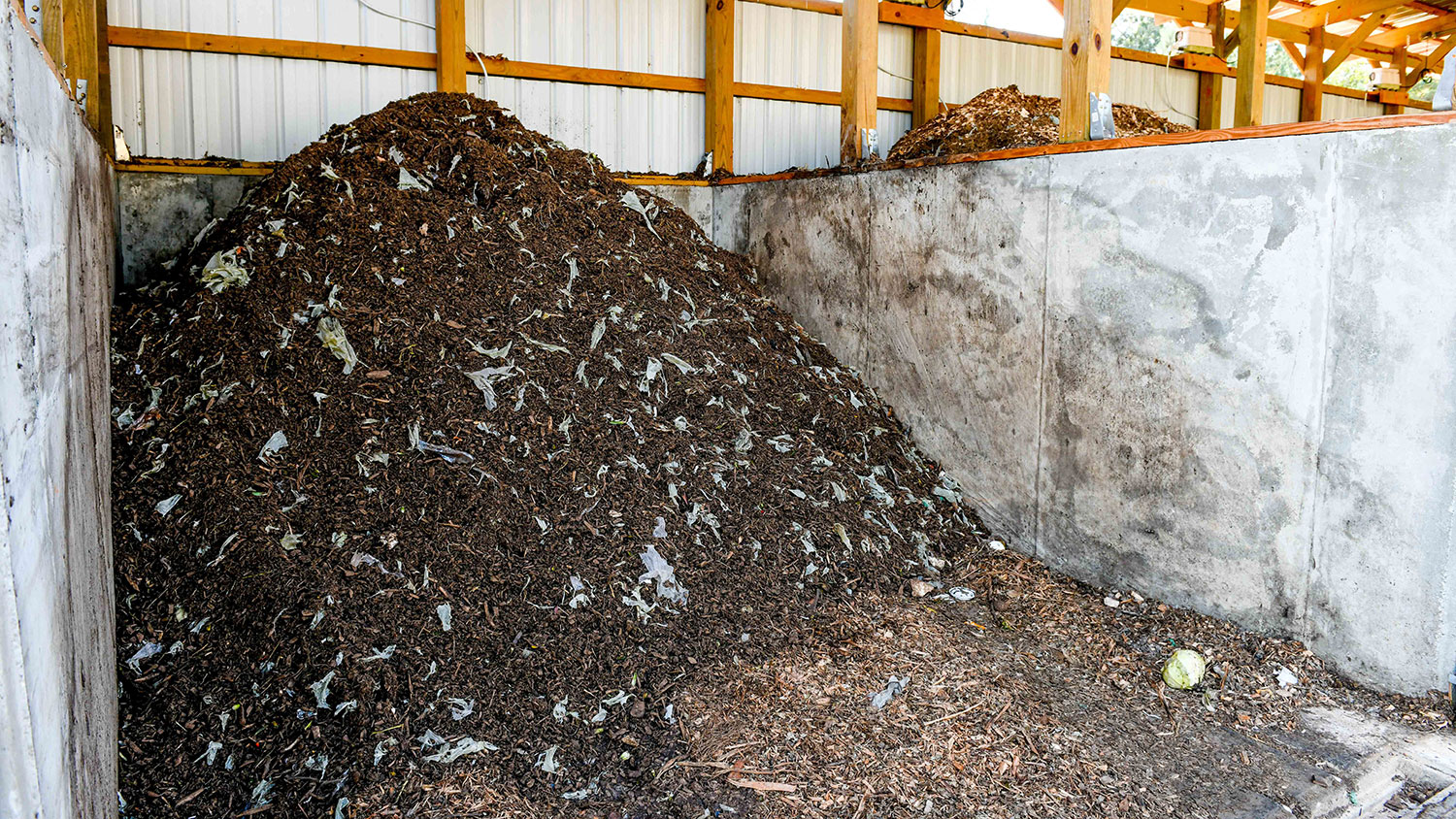 By composting organic material instead of sending it to the landfill, NC State improves our air quality, soil and food production.

Through a partnership with NC State Extension, the compost facility will be used to train extension agents on composting technologies and processes so they can deliver the information to farmers, landscapers and others across the state who want to compost organic waste.

“The idea of turning food, animal and yard waste into something useful for farmers and the community is a simple but effective example of the ‘think and do’ philosophy that defines our university,” says Richard Bonanno, associate dean and director of NC State Extension. “The compost facility is well-designed and built, and it’s a great model that is scalable for those who want to replicate it.”

NC State’s Agroecology Education Farm has been using compost for years to improve yields and enhance soil health, says Michelle Schroeder-Moreno, professor and director of educational programs for the Center for Environmental Farming Systems. But sourcing it from a private company has eaten into the farm’s budget.

“Having a compost source nearby will allow us to use even more compost in all of our production areas,” she says. “In the future, I would love to see us be able to facilitate small scale student-led research projects with the compost too.”

The farm, which is operated by the College of Agriculture and Life Sciences, supplies produce to NC State’s dining halls and restaurants. It is one of a number of campus partners that support the new compost facility. Others include the Facilities Division, College of Veterinary Medicine, Campus Enterprises, University Housing and NC State Athletics.

Through the Zero Waste Wolfpack program, compost and recyclables are collected at every home football game and soccer match, as well as single athletic events for several other NC State sports.

The program reduced the amount of waste ending up in the landfill by 22.5% from 2015 to 2019, according to Lani St. Hill, outreach coordinator for Waste Reduction and Recycling. In 2019, she says, Zero Waste Wolfpack set a record for helping divert nearly 30% of gameday waste from the landfill.

The growing volume of organic waste collected at athletic events is processed at the new compost facility, which continues to expand to meet increased demand from across campus.

Getting to this point has been a team effort, Bensley says.

“The compost facility has been in the works for a long time, and just to see it built and functioning is amazing,” he says. “We couldn’t have done it without the tremendous support of students, faculty, the Facilities Division, and all of our partners.”

To compost your food scraps and other organic waste, just look for green compost bins stationed near landfill and recycling bins at about 30 locations across campus, including a number of “Zero Waste Workplace” buildings, the dining halls, Talley Student Union, Carmichael Recreation Center and the JC Raulston Arboretum. Compostable utensils and other products are also available for campus events.

Back to School: Tips to help teachers configure classes