As a high school senior with excellent test scores and top grades, Karli Moore faced a tough choice when it came time to pick a college. It didn’t help that she was accepted by every institution she applied to, including Ivy League schools Harvard and Dartmouth.

She almost chose Wake Forest University after visiting its beautiful campus in Winston-Salem. Then she took a look at NC State, where she was a finalist for the Park Scholarship.

“When it came down to it, I felt that they were as different as they could be: small school versus big school, liberal arts versus technical,” she says. “But I just felt like I could develop at NC State. It felt like home.”

Now a junior majoring in chemistry, Moore knows she made a smart decision. The Park Scholarship provides a full ride, as well as grants for professional and personal enrichment. And both the Park program and the University Scholars Program open the door to numerous growth and leadership experiences.

Plus, NC State gives Moore the opportunity to pursue studies across a range of disciplines related to the elimination of hunger – an issue she’s grown increasingly passionate about in college.

That led to a prestigious Udall Scholarship in the field of Native American health care, announced on May 1.

The Roots of Food Security

Moore, a member of the Lumbee Tribe who grew up on a farm in Robeson County, says NC State has helped her gain a fuller understanding of one of the world’s most complex problems.

“I see that studying food security is the perfect way to blend a science background, agricultural interests, health, education, public policy, national security and global development,” she says. “It encompasses all those things and is the very definition of an interdisciplinary problem.”

It’s also a global problem. Over spring break Moore traveled with a group of students to Rome for meetings at the Food and Agriculture Organization, a U.N. agency working to eliminate hunger. And she’s participated in national conferences on tribal and minority health.

Those experiences helped broaden her thinking when she applied for the Udall Scholarship.

“The way I tied food security and tribal health together for this proposal was as preventive medicine,” she says. “If we could have healthier local foods that would lead to healthier lifestyles.”

Ahead of the Curve

Moore sees that principle in action on her parents’ farm – formerly tobacco fields – now a source of all-natural beef for local restaurants. Although her education has taken her around the world, it’s helped her appreciate her rural roots.

“Growing up I never wanted to drive a tractor or plow a field, but when I moved away I started to miss it,” she says. “I realize now that I got a lot of experience seeing how food systems work on the local level. As a country, we’re moving toward more local foods and more organic foods. It was good to see it ahead of the curve.”

Helping to solve the web of problems related to food security – in Robeson County and around the world – may  take a lifetime. But Moore is ready for the challenges ahead.

“I performed well in high school and thought maybe that was my peak,” she says “But to apply and win something at the national level motivates me to do more and go further. It gives me hope that I have something to contribute.”

She isn’t the only student working to confront some of society’s grand challenges. Three NC State undergraduates received the prestigious Goldwater Scholarship this year for their outstanding research efforts, ranging from the design of synthetic molecules to tracking the evolution of galaxies. 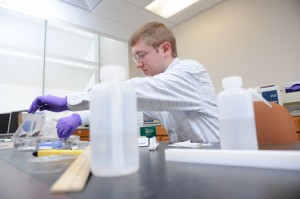 In a lab on Centennial Campus, mechanical engineering senior Jim Turner is looking for a simple way to power self-folding materials.

“Automatic folding is part of many modern technologies, including heart stents and solar panels,” he explains.

In fact, the field is wide open, with self-folding materials potentially making their way into a range of ordinary products, from children’s toys to greeting cards. Promising research has been done at MIT and Harvard, Turner says, but the technology is still too complex for many practical uses.

“I enjoy solving problems,” says the Raleigh native. “That’s what’s great about engineering. All we do is solve problems.”

His solution is simple – and small – involving the use of nanowires, the same technology behind wearable health sensors and flexible antennas.

“Due to the simplicity of the design, it can be scaled down for use in ingestible or injectable biomedical devices,” he says. “On a larger scale, the technique could be used to quickly construct shelters in disaster relief areas from flat polymer sheets with minimal effort.”

Turner, a Park Scholar and member of the University Honors Program, is also majoring in Spanish language and literature. He appreciates the culture of collaboration at NC State, where students are encouraged to “think and do” – to combine classroom learning with real-world experience. His work in professor Yong Zhu’s lab, where students conduct experiments on nanostructures and thin films, helped him prepare for the Goldwater competition.

“I like the focus NC State puts on undergraduates,” he says. “There are lots of opportunities to be involved in research.” 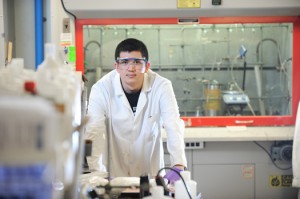 Chemistry major Eric Alexy, another Goldwater Scholar, shares Turner’s enthusiasm for scientific research. As a teen growing up in Cary, Alexy scored a part-time job as a lab assistant in a small biotechnology company. The owner introduced him to organic synthesis, the process of creating organic compounds through chemical reactions, sparking an interest that’s grown into a calling.

“I like to make new molecules,” Alexy says. “Especially some complex molecule that we were unsure how to make before.”

His lab in Dabney Hall, where he works with milligrams rather than kilograms of chemical compounds, isn’t much different from an industrial lab. But the work – under the direction of professor Jonathan Lindsey – is far more challenging.

One project involves porphyrins, a group of organic compounds that are structurally similar to chlorophyll, the pigment plants use to absorb light.

“Chlorophyll absorbs light in very particular regions of the visible spectrum, which is why it’s green,” he explains. “The molecules I made are very special because they absorb light across the entire visible spectrum.”

One of Alexy’s new molecules could ultimately improve the efficiency of solar panels.

“A lot of research is based on bio-mimicry,” he says. “We look at what nature uses to absorb light and try to make it better. Over millions of years nature has learned a lot of things through evolution that we couldn’t possibly learn on our own. We can easily use that as a starting point for our research.”

A Point of Light 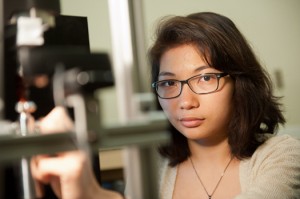 Mia de los Reyes, completing her sophomore year with a double major in pure math and physics, has also spent time studying nature. Another of this year’s Goldwater scholars, she served a summer internship at the Space Telescope Science Institute in Baltimore, operations center for both the Hubble and the James Webb space telescopes.

The experience gave her the opportunity to study the evolution of galaxies, one of astronomy’s most challenging fields, requiring researchers to analyze tiny points of light across vast distances.

“From that light and from the spectra of the galaxies – composed of millions of stars – I tried to figure out their mass and what different kinds of elements they have and how fast they form stars,” she says. “The goal is to learn how galaxies interact with their environment and with each other. There’s a lot of ambiguity in the field.”

De los Reyes, who has worked in professor John Blondin’s astrophysics lab, is lead author of a research paper that – if accepted for publication by an astronomy journal – could help reduce at least some of that ambiguity.

“This is like the crowning jewel of all my accomplishments ever,” she says, laughing. “I think if I could just publish this one paper I would be satisfied for the rest of my life.”

But she has plenty of opportunities to participate in more groundbreaking research. The Park Scholar is working with graduate students in professor Karen Daniels’ nonlinear physics lab to test a polymer tube for use in NC State’s new ultracold neutron source reactor.

“The problem with anything that’s ultracold is that the air is almost absolute zero so a lot of things don’t work right,” she explains. “Normally you’d use a rubber seal to make sure no air escapes, but rubber becomes brittle. So I’m working on a collaboration between the nonlinear physics people and the cryogenics physics people to understand the mechanics behind this folding tube.”

It’s a change of pace from last summer’s astronomy project, de los Reyes says. But that’s what she likes about NC State – the variety of opportunities to gain real-world experience through programs like the University Honors Program.

“I have some time and everyone says that your undergraduate years are the time to try as much stuff as you possibly can,” she says. “I’d like to work at one of the national labs or at a university someday.”

Last year, while working as an intern in the North Carolina Museum of Natural Sciences, de los Reyes attracted the attention of a young visitor, who watched her working on an astronomy project through the giant windows in the Nature Research Center.

The little girl rushed to find her mother, exclaiming, “Look, mom, she’s on the computer and she’s doing science!”

When something like that happens, de los Reyes says, it doesn’t matter whether you’re tracking the evolution of galaxies or solving the practical problems of fluid dynamics, you’re doing the science right.