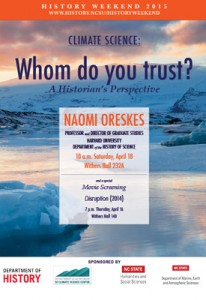 Oreskes contributes regularly to the discussion of the political realities of climate change science. Her interests include earth and environmental sciences, with a focus on understanding scientific consensus and dissent.

Her most recent works include The Collapse of Western Civilization: A View from the Future (2014) and Merchants of Doubt, How a Handful of Scientists Obscured the Truth on Issues from Tobacco to Global Warming (2010), both co-authored with Erik M. Conway.

The three-day weekend of events related to Oreskes’ presentation begins with an April 16 showing of the film Disruption, a documentary on climate change.

The full slate of events throughout the weekend are free and open to the public, but registration is recommended to reserve space.

Oreskes’ visit and the film are co-sponsored by the Southeast Climate Science Center and the NC State Department of Marine, Earth and Atmospheric Sciences.