Sam Trull’s favorite hashtag on Twitter is #slothlove. But she’s not just repeating an internet meme; she’s experiencing it, day in and day out, as a co-founder of The Sloth Institute in Costa Rica.

Trull, who received a zoology degree from in NC State in 2003, helps raise baby sloths who have lost their mothers, either because the babies fell to the ground and the mothers were unable to rescue them or because their mothers were killed by predators. Yes, they’re adorable. But she’s got a message for sloth lovers. “Just because it looks like they’re smiling doesn’t mean they want to hang out with you,” she says. Sloths don’t actually smile – they don’t have enough facial muscles to do that – but their faces appear perpetually happy, adding to the cuteness factor.

Trull told of her sloth-loving life at the College of Sciences’ “State of the Sciences” event at the Hunt Library last week. “How many of you have seen Zootopia?” she asked the audience as kids and parents raised their hands. 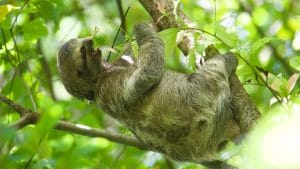 Trull can easily run down a list of fascinating sloth facts: They live in trees, and only come down once a week to go to the bathroom. Yes, they’re slow — due to a slow metabolism and low calorie count of the foods (mostly leaves) they eat. But they’re surprisingly good swimmers. They are in the same family as anteaters and armadillos. They can grow algae on their fur.

And their babies—each mother has only one at a time—stay with their mothers for about six months, allowing for a lot of bonding. So when Trull is acting as a surrogate mom, she lets them ride on her just as the babies do with their mothers. “I do feel like their mom,” she says. “I try to think, ‘What would their mom do?’ ” Her work with the babies has been featured on BBC’s Nature’s Miracle Orphans. When her wards are big enough, they are released to the wild—but in a controlled way so that they can return to shelter periodically if necessary.

The Sloth Institute researches and records data on wild sloths and sloths who’ve been released and conducts informational campaigns to protect the animals and their habitats. But it’s not a sanctuary, meaning it’s not open for public tours. Which brings us to another of Trull’s messages for sloth lovers: “Say no to sloth selfies.” That may not be an issue in the United States, but in places like Costa Rica where eco-tourism is a popular draw, visitors often want to have their pictures taken with sloths — usually a captive sloth offered by a local resident who wants the tourist to pay for the photo op. None of that is good for the sloths, who need to be in the wild with no human contact.

Trull started working with animals when she was 17 and volunteered at the Duke Lemur Institute in Durham, and she also has a master’s degree in primate conservation from Oxford Brookes University. “I used to be a primate snob,” she says. “I thought sloths were not smart enough to be interesting.” But after she met her first sloth, working with a group called Kids Save the Rainforest in Costa Rica, she was hooked. “They are way more cool animals,” Trull says.

This post was originally published by the NC State Alumni Association.

This post was originally published in College of Sciences News.