Three NC State researchers are honored with the U.S. government's top award for early-career scientists and engineers. Meet the acclaimed young faculty members at the forefront of their fields.

As an associate professor of mathematics at NC State, Lorena Bociu works with some of the most complex concepts in the field. Her research papers delve into things like hyperbolic equations with mixed boundary conditions and the feedback stabilization of a linear hydro-elastic system.

That’s the easy stuff. Bociu’s toughest challenge is convincing young people — especially girls — that math can be a lot of fun. Misconceptions about math start early, she says, so her outreach efforts often focus on kids in elementary and middle school.

“College is too late,” she says. “The damage is done.”

She’s developed middle-school programs with the NC State chapter of the Association for Women in Mathematics, created a program called “Math Doesn’t Bug Me” for the BugFest expo at the North Carolina Museum of Natural Sciences and won funding from the National Science Foundation for a program called GAMMA: Girls in Applied Math, Modeling, and Analysis. 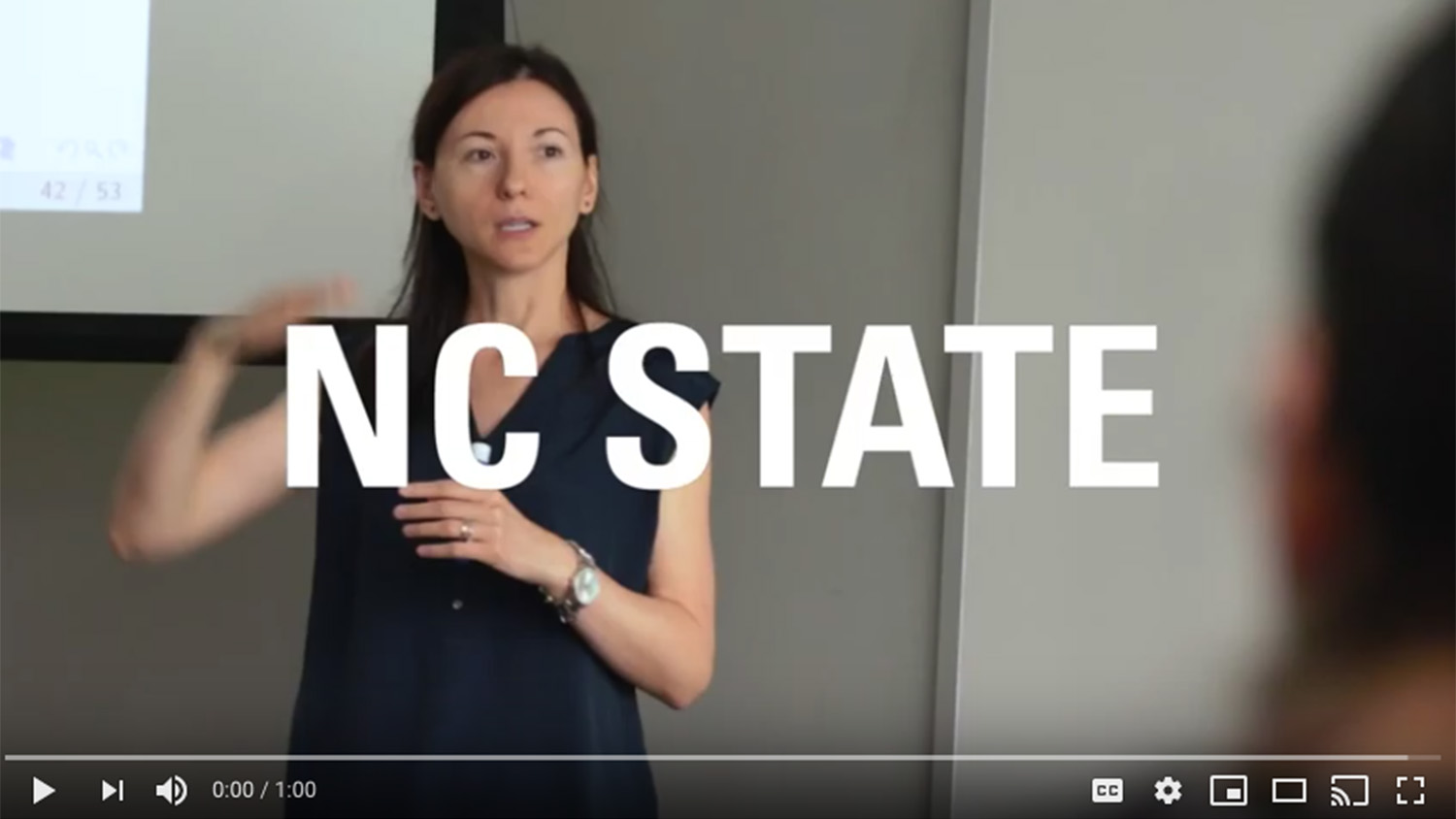 Lorena Bociu helps others see how fun, beautiful and useful math can be through outreach and mentoring.

While Bociu is focused on encouraging math’s next generation, she got some encouragement of her own in July, when the White House announced the winners of the Presidential Early Career Award for Scientists and Engineers. She was one of three NC State researchers who received the honor July 25 at DAR Constitution Hall in Washington, D.C.

Scoring three presidential early-career awards in a single year is a first for NC State. The awards are the U.S. government’s highest honor for young scientists and engineers, given to researchers “who show exceptional potential for leadership at the frontiers of scientific knowledge during the twenty-first century,” according to a White House statement.

Back from D.C. in her office on Centennial Campus, Huang is also focused on the next generation. “My students are awesome,” she says. “Everything is about my students.” She meets with her graduate students weekly, putting particular emphasis on their writing skills. For her international students, the complexities of the English language can be nearly as challenging as their research projects.

She recruits grad students for her lab from a class she teaches in continuum mechanics. “It’s the first class graduate students should take in mechanics, and we use a lot of differential equations and calculus,” she says. “In this class I can finally tell my students why they needed to learn calculus three years ago as undergraduates. They finally get to use that skill.”

“Laboratory experiments have their limitations because there may be 10 or 20 factors that influence a phenomenon,” she explains. “Computer simulations help isolate these factors so we can find out exactly what is causing something to occur.”

Her research on the effects of strain on heart valve tissue, published in the journal Mechanics of Time-Dependent Materials, is the first of its kind. The work may improve researchers’ understanding of tissue processes such as tumor growth and the formation of thrombi — clots that form and remain in a blood vessel.

Huang isn’t surprised that NC State is seeing an increase in early-career faculty awards. With both donor support and research funding on the rise, the university has been able to significantly boost its investment in faculty, infrastructure and scholarships in recent years. That’s helped attract high-performing students and faculty.

After completing a postdoctoral fellowship at MIT, Huang came to NC State in 2010, just as the campus was beginning a growth spurt. At a time when faculty at many universities were struggling to find office and lab space, NC State was adding new buildings, notably on Centennial Campus.

“The research infrastructure at NC State is very good,” she says, pointing to the High Performance Computing Laboratory, where she runs many of her computer simulations, and the Analytical Instrumentation Facility, home to some of the world’s most advanced research instruments, including a 3D X-ray microscope, secondary ion mass spectrometer and analytical scanning transmission electron microscope.

At the instrumentation facility, where Huang serves as associate director, she isn’t the only faculty member with a presidential early-career award. Director Jacob Jones and former Associate Director Elizabeth Dickey both received the White House award earlier in their academic careers. LeBeau, one of NC State’s 2019 winners, also served as an associate director before his move to MIT.

The Presidential Early Career Award for Scientists and Engineers, first awarded in 1996, signals the high priority placed by the government on maintaining the nation’s leadership in science and engineering. The White House Office of Science and Technology Policy coordinates the awards with participating departments and agencies. More than 300 awards were given this year for researchers nominated in 2015, 2016 and 2017. Bociu and Huang were nominated by the National Science Foundation; LeBeau was nominated by the Department of Defense.