We may be scattered far and wide, but the crew behind WolfBytes Video Services spans the distance to keep the Pack tuned in and upbeat.

For a department with just three full-time staffers, WolfBytes Video Services cranks out a lot of content for NC State. The team shoots and edits video, livestreams conferences to your favorite platforms, hosts and distributes podcasts, creates captions for video programs and converts tapes to digital formats.

Thanks to its cadre of 40 student workers, WolfBytes also operates three television stations and a radio station.

“We started playing music back in 2001 for people to listen to when they were on hold, waiting to sign up for WolfTV, the campus cable service,” says Program Director BJ Attarian. “One thing kind of led to another, which led to another.”

The music channel evolved into WolfBytes Radio, now broadcasting on 88.1 HD-3 and streaming online. WolfBytes’ three television stations were added over the years to meet the needs of various campus audiences.

All three channels are hosted on the WolfTV cable system and stream via Apple TV and Roku apps.

With the university’s operations reduced due to the coronavirus outbreak, WolfBytes is evolving once again — this time to deliver critical, timely information to a campus community no longer on campus, utilizing students and staff now scattered across the country.

“The radio station didn’t miss a beat,” Attarian says. “No pun intended because it’s a dance station. But they were able to keep right on going, and it doesn’t sound any different, which is amazing.”

Home Is Where the Studio Is

From his home studio in Garner, DJ Brandon Bouché, who also works as a WolfBytes broadcast engineer, balances his infant daughter on his lap as he spins a remix of “Baby Shark” by Jauz.

The upside to a pandemic, he says, is the chance to spend more time with his daughter. And challenges on the job are nothing new to Bouché, who worked as a weather forecaster after graduating from NC State in 2012 with a degree in meteorology. “Whether it’s our PackTV channel or WolfBytes Radio, I’m the guy who makes it all work and figures out all the new, fun things to do with it,” he says. “If something breaks, I fix it.”

For now, he jumps back and forth between recording voice tracks for his radio shift and handling his engineering duties.

“I can be programming something on a computer or working on some sort of technical project all day. But if I’m pulling my hair out, then I can shift and just have some fun and get to talk to people and listen to music,” he says. “It gives me something completely fresh and different to do in my daily routine.” 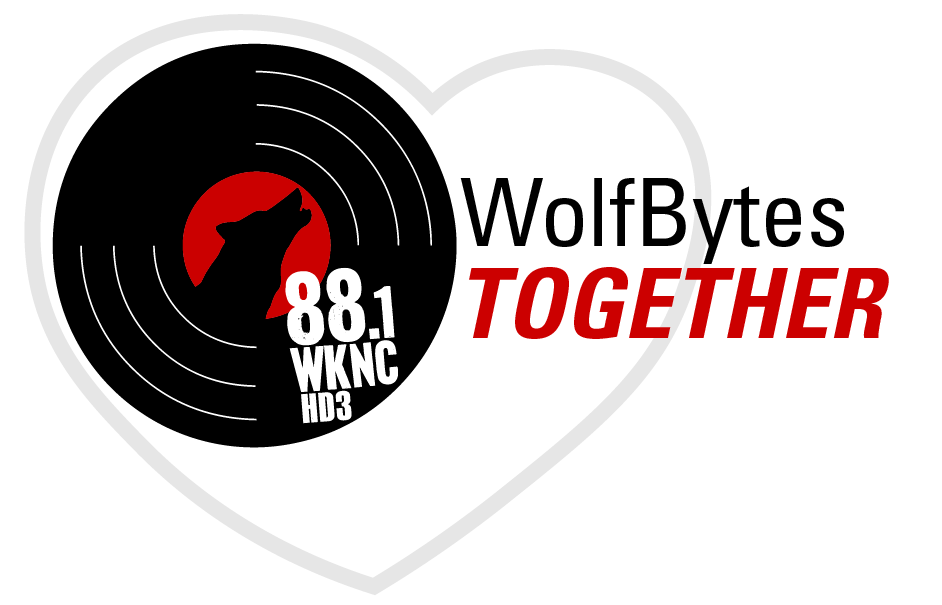 WolfBytes Radio produced a one-hour program that aired April 8 featuring upbeat music with a positive theme plus interviews with people providing support services to members of the Wolfpack community during the COVID-19 outbreak.

You can listen to recordings of the interviews on the Wolfbytes website.

DJ Chris Lehman, who also works as a WolfBytes video production specialist, made the transition to remote working fairly easily, setting up his home studio with an eye toward convenience. “I can literally roll right out of my bed into my office chair and get to work, which is kind of nice,” he says.

Lehman, who earned an undergraduate degree in communication at NC State in 2016, got his start at PackTV as a student worker. Since joining the WolfBytes staff as a temporary employee last November, he’s worked on video shoots, produced promos for the radio station and managed livestream events. Just before the university went on reduced operations, he served on the team that helped convert NC State’s Innovative Women’s Conference into a virtual event.

“They hosted the event on Zoom, but it didn’t feel virtual; it felt like you were there,” he says. “Our role was to play their videos and make sure they flowed well with the presentations. We were able to put together a nice show for them.”

The Beat Goes On

WolfBytes staff have also helped faculty members record lectures for their courses. Now that all classes are being taught online, staffers are continuing to help faculty and departments distribute their content remotely. But perhaps the most important service they’re providing is keeping the NC State community informed and engaged during a difficult time.

It’s a mission student DJ Colin Attarian takes seriously. The history major, whose dad leads the WolfBytes team, peppers his on-air voice tracks with the latest information on the university’s response to the pandemic. DjWhtDaHek (as he’s known on the air) delivers it all in a silky-smooth voice that earned him the nickname “Radio” in middle school.

“That has been a key in all our shows,” he says. “Instead of just saying, ‘This song is coming up’ or ‘Hit me up with a tweet or a request,’ I try to give a little bit of information about what’s going on, because obviously this is a pretty big situation.”

With athletic events postponed or canceled for now, WolfBytes has opted to simulcast WolfBytes Television on the PackTV channel to give greater broadcast exposure to university updates and to promote resources and events related to the coronavirus outbreak.

“Broadcasters serve the public interest. And this year, right now, that’s exactly what we’re doing,” he says. “Playing music is fun, but getting information out to our community is what we’re about. I’m really glad to be part of that.”