The new decision support system consists of two computational modules that can help users determine how best to prepare for the future and identify the best courses of action to alleviate mental health challenges. The system was developed as part of the Call for Code Spot Challenge: Mental Health in a Time of Crisis, which was organized by IBM, in partnership with Anthem Inc., Beacon Health Options, XPRIZE and the NC-State based EMPOWER Collaborative.

Challenge participants included more than 100 students from 12 universities. The participants leveraged IBM technologies and a network of more than 35 mentors to build solutions in support of mental health in a time of crisis.

“Mental health challenges, which were already daunting, have been exacerbated by the COVID-19 pandemic,” says Tanzid Hasnain, a Ph.D. student at NC State and member of the team that developed the system. “We wanted to help those whose mental health has been most strongly affected by COVID. And CDC data suggests that Hispanic populations are more likely than other groups to report symptoms of anxiety and depression.”

The entire decision-support system was developed over the course of only two weeks, using open-source data and programming tools. The system has two components: a predictive tool and a prescriptive tool based on what is called the Markov Decision Process (MDP).

The predictive tool is a model that uses state-level data from multiple sources to predict the percentage of the Hispanic population that may have symptoms of anxiety and depression in the following week. Specifically, the predictive tool uses data on unemployment claims, insurance coverage, the number of COVID cases and the number of COVID deaths.

“The predictive tool is useful because, ideally, it gives nonprofit organizations, healthcare providers and policymakers advance notice of what mental health demands will probably look like a week from now – which gives them the opportunity to prepare,” says Rahman Khorramfar, a Ph.D. student at NC State and part of the development team.

The MDP, on the other hand, is a mathematical tool that helps users determine which course of action will be most effective at reducing the number of people experiencing symptoms of anxiety and depression. In other words, it can help users figure out how to get the largest mental health benefit out of their available resources and possible actions.

“The MDP is much more flexible than the predictive tool,” says Kehinde Odubela, a Ph.D. student at N.C. A&T who is also part of the system-development team. “For example, it can be used to determine which actions would have the most benefit on a city-by-city basis. However, the MDP also has to be customized, based on which options any organization is considering to address mental health challenges in a specific state or community.”

That said, the team also has a number of adjustments they’d like to make to the decision support system – after all, they developed the prototype in less than a month.

“One of the improvements we would like to make with the predictive modeling tool involves automating data collection,” says Sarah McConnell, part of the system development team and an undergraduate at NC State. “Ideally we would like the decision support system to update weekly, upon the release of new relevant information from our online data sources.”

“We’d also like to make the predictive tool more robust by introducing additional factors, such as socioeconomic variables,” says Nasrin Alizadeh, a member of the team and a Ph.D. student at NC State. “Currently, we consider variables that change during our proposed timeline. However, there are factors, such as education level, that may not change during these periods, but we believe are playing a role.”

The researchers also want to determine what they can do to maintain the predictive tool’s utility when COVID-19 becomes less of a contributing factor to mental health concerns.

Lastly, the researchers think they can improve the MDP by allowing users to easily plug data on real-world outcomes back into the model.

The decision support system was the winning entry in the Call for Code Spot Challenge: Mental Health in a Time of Crisis. The team will have an opportunity to pitch their solution to executives from IBM and Anthem Digital. Video of the development team’s entry in the competition can be seen at https://youtu.be/ZjTm5eEtTbY. 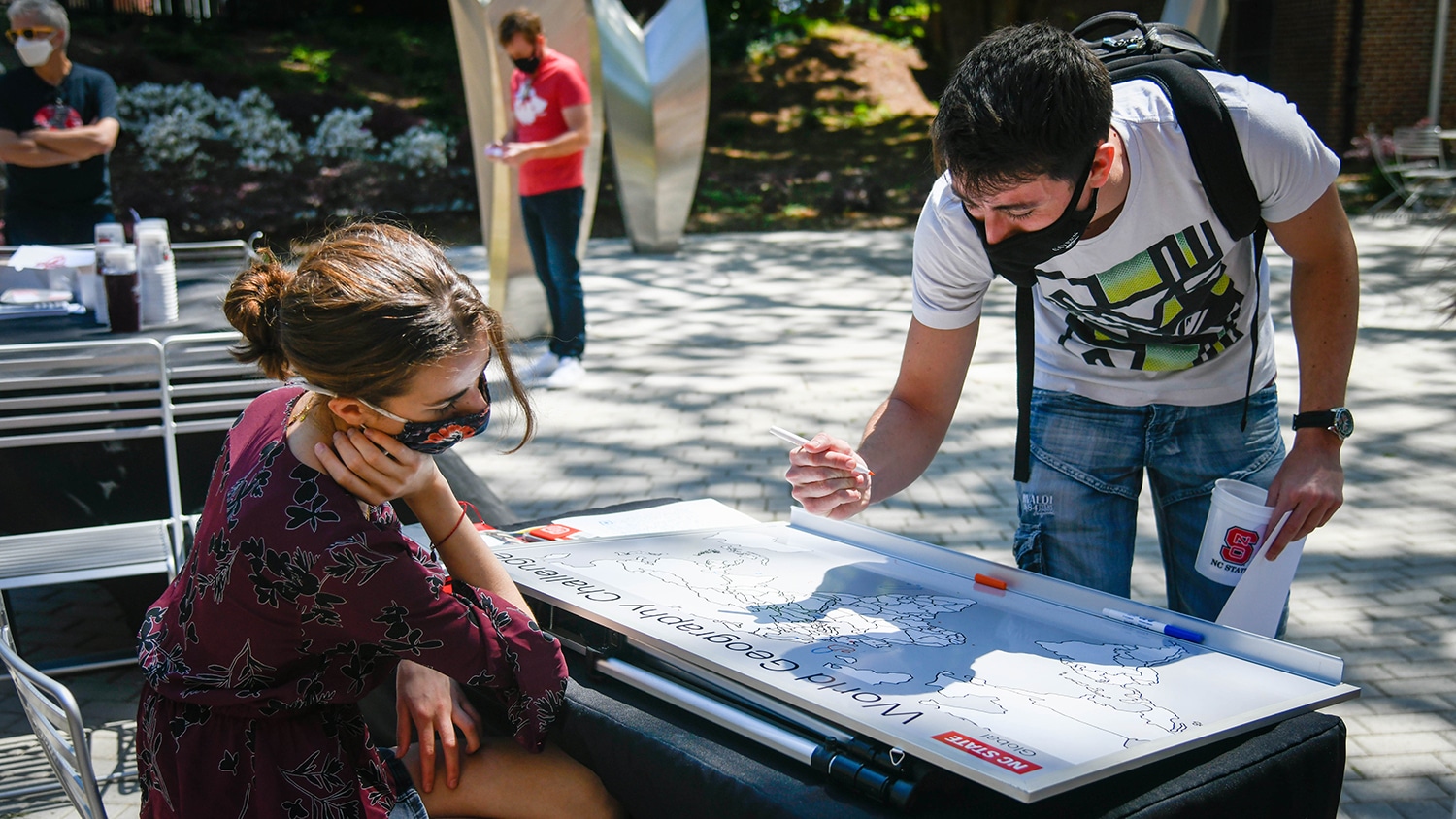 At Home or Abroad, Students Immerse Themselves in Global Engagement