Explore the center that’s pushing the boundaries of 3D printing — and helping faculty and industry take their work to the next level.

Deep in Daniels Hall, NC State researchers are creating game-changing innovations — one layer at a time.

The Center for Additive Manufacturing and Logistics (CAMAL) brings together faculty, students and industry partners to solve complex problems with cutting-edge 3D-printing technology.

Also known as additive manufacturing, 3D printing is the process of building an object by successively laying down layers of materials. Layers can be as thin as 50 microns, roughly half the thickness of a sheet of paper, and are printed in an arrangement that’s controlled by a computer.

It may seem like a relatively new technology, but it’s one that’s been around for more than three decades. And NC State has been a long-standing leader in the space.

With respect to new technology development, we’ve always been a step ahead of other programs.

What began as an endeavor to explore 3D-printed medical implants has grown into a multidisciplinary hub pushing the boundaries of everything from manufacturing to medicine to plant science.

Ola Harrysson, a professor in the Edward P. Fitts Department of Industrial and Systems Engineering and co-director of the CAMAL, facilitated the university’s purchase of the first commercial metal 3D printer in 2003. Protocols for 3D printing with titanium — developed by Harrysson’s team using that same printer — are now used worldwide.

While many universities are dipping their toes into 3D printing for the first time, Tim Horn, the center’s director of research and assistant professor in mechanical and aerospace engineering, says NC State still reaps the benefits of its early start.

“With respect to new technology development, we’ve always been a step ahead of other programs,” he says.

A recent collaboration serves as a shining example of the center’s strengths.

The U.S. Navy requires copper to create vacuum tubes, which are used for satellite communications, surface-to-air missile defense, GPS and other purposes.

Traditional vacuum tubes can take months to produce, and they’re made by brazing together hundreds of hand-assembled parts, causing many to fail in service because of errors during assembly.

With 3D-printing technology, a vacuum tube can be printed as one continuous piece. That eliminates potential failure points, typically found at the edges between two bonded-together parts.

The process also opens up room for design improvements. Traditional vacuum tubes are produced on lathes that require axial symmetry, but 3D printing would allow for new freeform configurations that are more compact or more efficient.

Rather than taking months, parts can be made in a matter of days. What’s more, the center’s sophisticated monitoring technology can identify potential defects before, during and after the printing process.

When we get industry together to solve problems, it’s amazing what we can pull together.

“In the future, you could imagine putting one of these 3D printers on an aircraft carrier or spaceship and make the parts on demand as you need them, instead of having to go back to the manufacturing source,” says Horn.

NC State’s work with copper has also attracted industry funders including General Motors, GE Additive and Siemens. Together, they’re collaborating on a new initiative to keep up the project’s momentum: the Consortium on the Properties of Additively Manufactured Copper.

“When we get industry together to solve problems, it’s amazing what we can pull together,” Horn says.

The center’s state-of-the-art technology and commitment to innovation has made it a model for fellow universities — and a hub for faculty and industry collaboration.

“We’re doing work for national labs, for industry, for other universities, because we’ve set up the center with capabilities that no other university has,” says Horn.

We’ve set up the center with capabilities that no other university has.

He adds that the CAMAL has a grasp on the entire 3D-printing process unlike any of its peers.

“We can produce and design the raw materials here. We’ve reconstructed all of our equipment with process monitoring and control capabilities to identify defects. We can characterize the powders and materials before they go in the machine and after they get out of the machine,” he says.

“We have the whole supply chain under one roof.”

A new gas atomizing machine arriving soon will be the next game changer for the center.

The machine will allow Horn’s team to produce the source material for their 3D-printing projects: atomized metal powders. In the 3D-printing process, those powders are carried across a plate, where a high-powered laser selectively melts particles together to form a solid layer.

For industry, creating metal powders is a multimillion-dollar process, and Horn says getting his hands on spare powder from industry partners can take several months. Now, his team can jump into projects on their own time — and explore new avenues of materials research.

“There’s a couple of other labs I know of in the U.S. — a national lab and a university — that have atomization equipment. But they don’t have the additive capabilities we have, so they often collaborate with us. We can do the whole suite of activities, which will be really powerful,” he says. 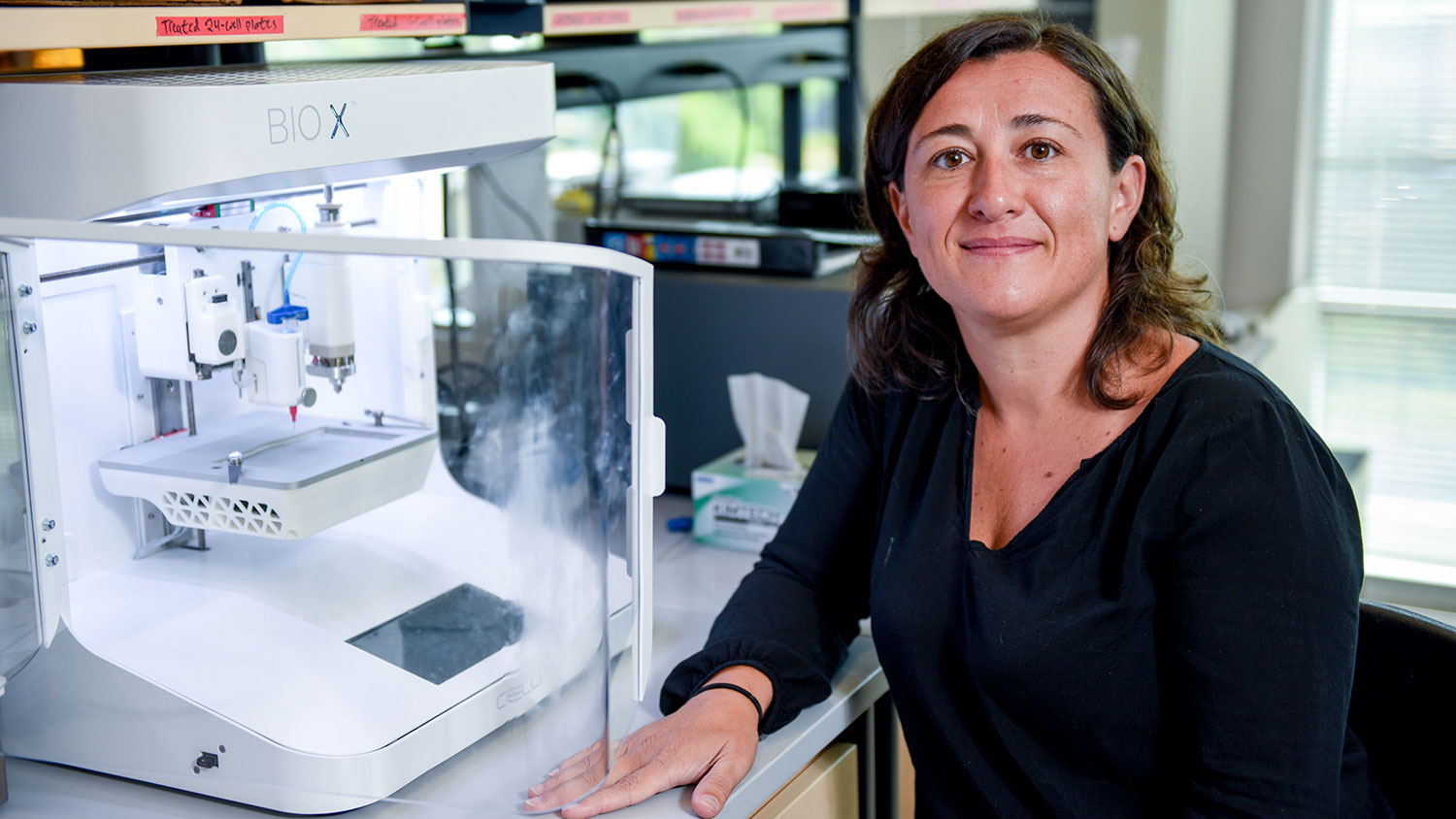 An innovative project led by Ross Sozzani — seeking to apply 3D bioprinting to plants for the first time — found its roots in the center.

“No one discipline is able to address all of these problems, and I think that’s where the really interesting work is being done, on the boundaries of all of these different disciplines,” Horn says.

In addition to faculty, the CAMAL has become a hub for innovation among industry leaders.

The center is membership-based, drawing in hundreds of companies such as GE Additive, ABB, Praxair, ATI and Siemens. Horn’s team works with them to 3D-print parts, conduct research and find other solutions to business challenges.

Last year, NC State was one of eight U.S. universities selected to receive a 3D laser printer from GE Additive. Horn says NC State’s commitment to pushing the boundaries of the field, along with top-tier safety protocols, made the university stand out.

The work that’s done in the Center for Additive Manufacturing and Logistics reaches far beyond its four walls — from medical models to aerospace innovations to splints for sea turtles.

Horn believes the CAMAL is well-positioned to take on whatever comes next in additive manufacturing.

Over the next decades, he says faster processes and more efficient use of metal powders — which are often wasted or liable to cause defects — will be an important step.

Multimaterial technologies is another frontier within NC State’s reach. Being able to seamlessly combine different materials, such as ceramics and metals, in a single part would have huge implications for additive manufacturing.

“There’s a Pandora’s box of new science to be done there. With our setup now, we could do a lot of work in that area alone,” says Horn.

Space travel also holds new promise. In the future, NASA has visions of sending 3D printers to the moon, where they could use moon dust (made of numerous metal oxides) to print supplies for human missions. The CAMAL has even collaborated with NASA to 3D-print parts from simulated moon dust, called JSC1 Simulant.

For now, the next big step will be the center’s move to the new Fitts-Woolard Hall on Centennial Campus in 2020. 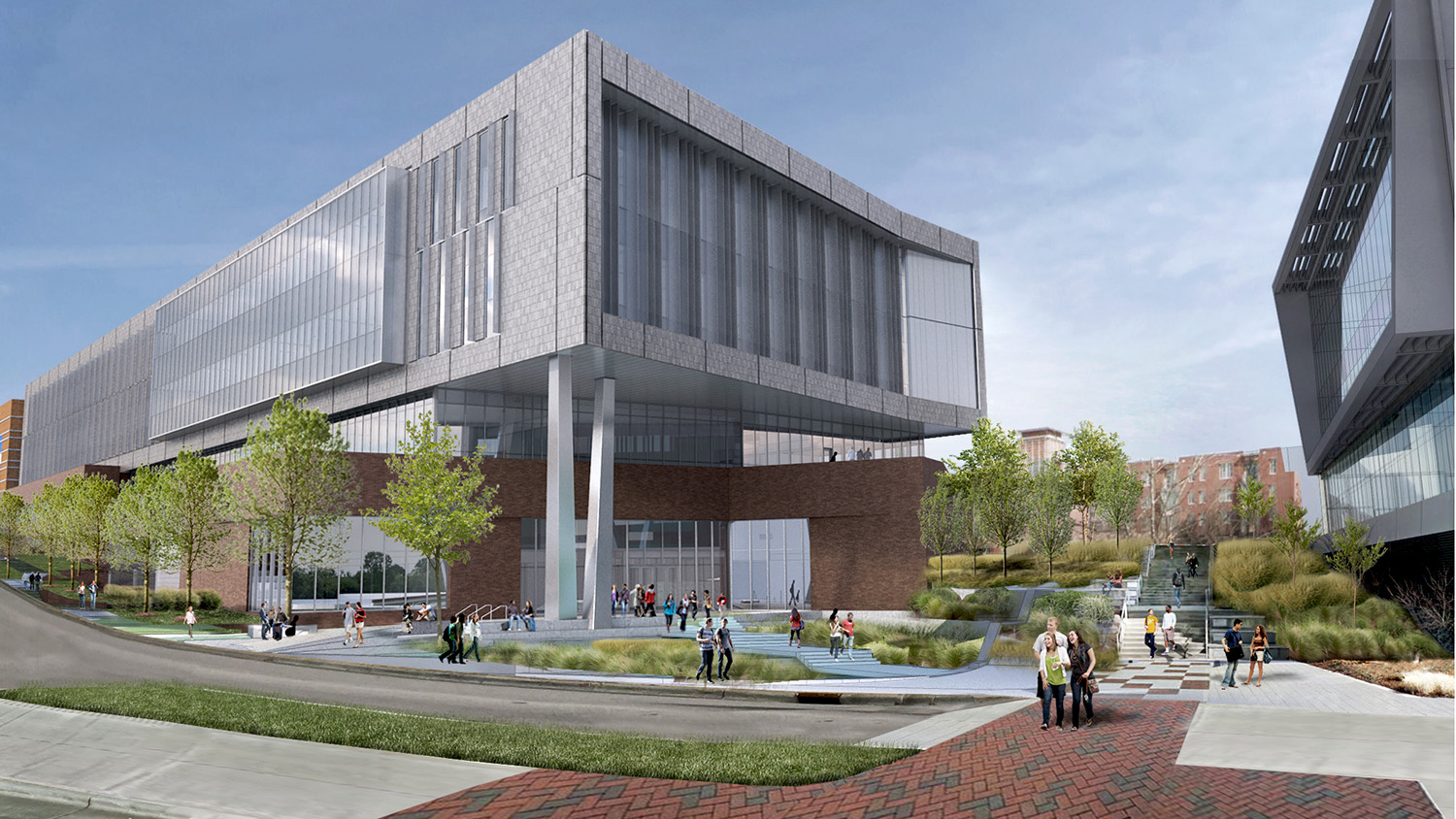 The Future Home of Innovation

Step inside one of the most dynamic research and education environments in the world.

Horn says bringing together an array of disciplines and equipment in one room will foster better collaboration.

The openness of the space will also empower Horn’s team to more easily swap in new, state-of-the-art equipment — and maintain NC State’s decadeslong place as a leader in the field.

“We’ve always been able to stay ahead of the curve,” Horn says. “We just need to keep pushing.”